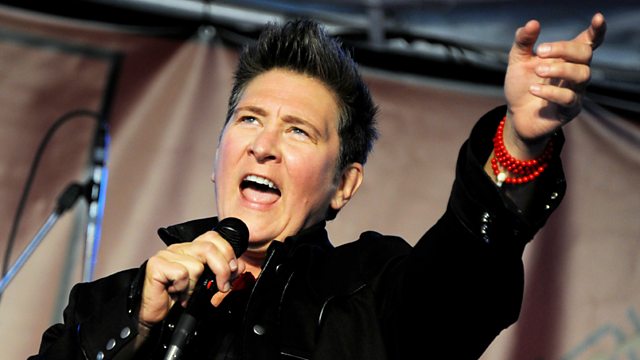 Clive Anderson is joined by kd lang and Anthony Horowitz. Rachael Stirling talks to the Fairy Jobmother Hayley Taylor. With music from Seasick Steve and Guillemots.

Clive talks to singer-songwriter k.d. lang. Her ground breaking twenty five year career has see her collect four GRAMMY Awards, a Brit, a VMA and Canada's highest civilian honour, The Order of Canada. With the release of her album Sing It Loud, she joins us on the tail end of her UK tour with her band the Siss Boom Bang.

Although Anthony Horowitz's phenomenally successful Alex Ryder books have come to an end (which persuaded the notoriously difficult market of teenage boys to read), Anthony is no less busy. 81 years after the death of Sir Arthur Conan Doyle, Anthony has written a new Sherlock Holmes book and has penned a new series for ITV1 - 'Injustice' a psychological thriller set in the British legal system.

The explorer Ed Stafford Walked the Amazon, from source to sea, 4000 miles in total and it took him 853 days. So it was a stroll in the park to get himself to the Loose Ends studio and tell us about his adventures.

Rachael Stirling talks to the Fairy Jobmother Hayley Taylor who has her work cut out trying to help the unemployed and seemingly unemployable back to work for her second series on Channel 4.

There's music from the effortlessly inventive, Brit award winning four piece Guillemots, performing their new single 'I Must Be A Lover' from their album Walk the River.

And American bluesman Seasick Steve performs on a variety of customised guitars for his latest album 'You Can't Teach An Old Dog New Tricks'. It could be a 3 String Trace Wonder, a Cigar Box guitar or even one made from a Morris Minor hubcap - which one will it be when he plays 'It's A Long, Long Way' for us in the Loose Ends studio?