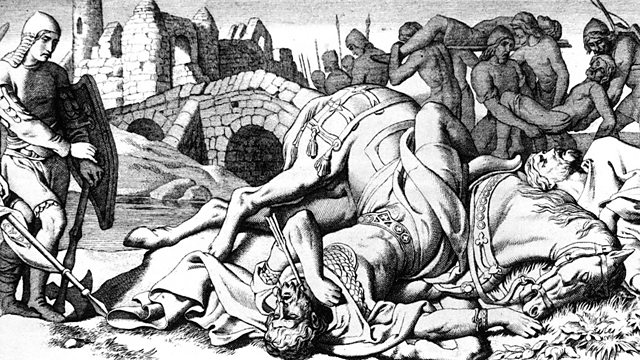 Melvyn Bragg and his guests discuss the Battle of Stamford Bridge, a decisive English victory over Viking forces which took place in September 1066.

Melvyn Bragg and his guests discuss the Battle of Stamford Bridge.In the first week of 1066 the English king, Edward the Confessor, died. A young nobleman, Harold Godwinson, claimed that Edward had nominated him his successor, and seized the throne. But he was not the only claimant: in France the powerful Duke of Normandy, William, believed that he was the rightful king, and prepared to invade England.As William amassed his forces on the other side of the Channel, however, an army led by the Norwegian king Harald Hardrada invaded from the North Sea. Harold quickly marched north and confronted the Norsemen, whose leaders included his own brother Tostig. The English won an emphatic victory; but barely three weeks later Harold was dead, killed at Hastings, and the Norman Conquest had begun.With: John HinesProfessor of Archaeology at Cardiff UniversityElizabeth RoweLecturer in Scandinavian History of the Viking Age at Clare Hall, University of CambridgeStephen BaxterReader in Medieval History at King's College LondonProducer: Thomas Morris.

The Origins of Infectious Disease