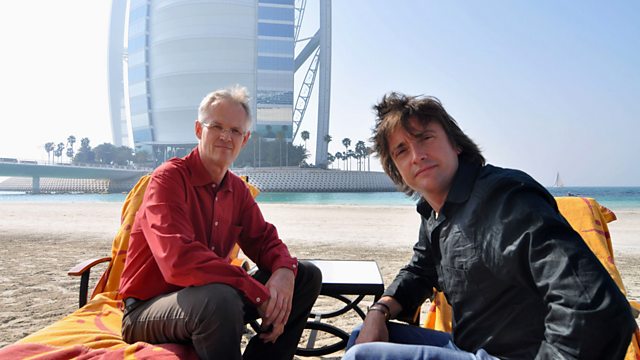 Richard Hammond looks at how Dubai's sail-shaped hotel Burj Al Arab was built, including creating sea defences and coping with steel expansion due to extreme heat.

Richard Hammond checks out the world's tallest and most distinctively shaped hotel, the 320-metre-high Burj Al Arab, or Arabian Tower. Rising from its own custom-built island, 300 metres off-shore, the sail-shaped building has already become one of the world's most recognisable buildings, and an icon for Dubai.

Constructing the island was the first engineering challenge. Protecting it from two-metre-high waves called for strong sea defences. Richard demonstrates the power of quite small waves by explosively releasing a ton of water just two metres above a coffee table. His second coffee table relies on a furniture protection system inspired by the Burj's sea defences. Tyres lashed together create spaces that absorb the destructive energy of the 'wave'.

Building in the extreme heat of the desert posed construction challenges due to steel expansion. The 85-metre steel trusses forming the hotel's exoskeleton were fitted together thanks to an ingenious solution inspired by an engine cam, a rotating mechanism which presses down on valves by moving eccentrically or off-centre. Clever rotating fixings were used, which allowed builders to move the fixing pin off-centre until the two holes married.

The Burj Al Arab is a high-tech palace: remote controls operate lights, doors, curtains, and climate control. Richard creates his own luxury hotel room, with a sophisticated lighting system, and watches it all go up in flames simply because of what dimmers do to the electrical current. The solution lies in a capacitor - the electrical component used to fire a camera flash.

Finally Richard reveals how the secret of the Burj's extraordinary and unnaturally glassy water fountains - achieved thanks to laminar flow - and a revolutionary fire hose.