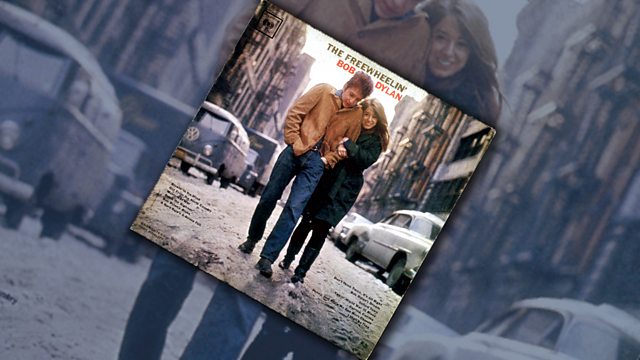 As Radio 2 celebrates Bob Dylan's 70th birthday, the cream of the British folk scene re-interprets songs from his iconic album The Freewheelin' Bob Dylan. Mark Radcliffe guides us through a collection of specially recorded songs that illustrate not only Dylan's great writing skills, but also the inventiveness and creativity of British folk artists, some of whom inspired a young Dylan when he first visited Britain in the early 1960s.

Although Freewheelin' is Dylan's second studio album, it initiated the process of writing contemporary words to traditional melodies. Eleven of the thirteen songs on the album are original compositions and it contains several that came to be regarded as his best and classics of the 1960s folk scene: Blowin' in the Wind, Masters of War, A Hard Rain's A-Gonna Fall and Don't Think Twice, It's All Right.

In December 1962, partway through recording Freewheelin', a young Bob Dylan came to London for the first time where he met English folk singer Martin Carthy. Carthy taught Dylan the traditional songs Scarborough Fair and Lord Franklin, both of which would appear on the album just months later as Girl from the North Country and Bob Dylan's Dream. Almost fifty years on, we come full circle, as Bob Dylan's Dream is performed by Martin Carthy himself.

The cast list is a roll call of British folk's premier talents, with the complete track listing as follows: Blowin' in the Wind by Seth Lakeman; Girl from the North Country by Thea Gilmore; Masters of War by Martin Simpson; Down the Highway by While and Matthews; Bob Dylan's Blues by Ewan McLennan; A Hard Rain's A-Gonna Fall by Karine Polwart; Don't Think Twice, It's All Right by Ralph McTell; Bob Dylan's Dream by Martin Carthy; Oxford Town by Coope, Boyes and Simpson; Talkin' World War III Blues by Billy Bragg; Corrina, Corrina by Cara Dillon with The Scoville Units; Honey, Just Allow Me One More Chance by Rory Mcleod; and I Shall Be Free by Rab Noakes with Fraser Speirs.

Nashville Cats: The Making of Blonde on Blonde

See all episodes from Bob Dylan 70