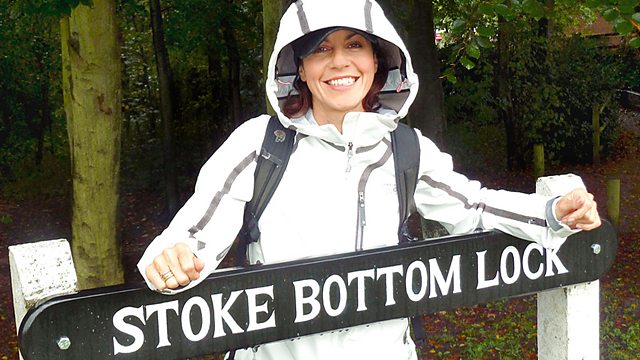 The Worcester and Birmingham Canal

Julia Bradbury walks along the Worcester and Birmingham Canal, the highlight of which is a two-mile flight of 30 locks which lower it by 220 feet.

Seasoned stomper Julia Bradbury dons her walking boots once again to explore her own British backyard, travelling along the country's network of canals and their accompanying towpath trails. Julia navigates Highland glens, rolling countryside and river valleys, as well as our industrial heartlands, and follows these magical waterways as they cut a sedate path through some of the country's finest scenery.

Julia starts this walk in Birmingham, which surprisingly boasts more miles of canal than Venice. But her mission isn't to seek out gondolas or ice cream - it's to discover how the city, through its canal network, became the centre of the Industrial Revolution. It's also the start of Julia's two-day walk along the historic and picturesque Worcester and Birmingham Canal, which cuts a 30-mile path through to the River Severn. The highlight of the canal is a dramatic two-mile flight of 30 locks which lower the canal by 220 feet. Negotiating this flight of locks is considered to be a rite of passage by boaters, and it's definitely one for the tick list for walkers.

The Kennet and Avon Canal

See all episodes from Canal Walks with Julia Bradbury