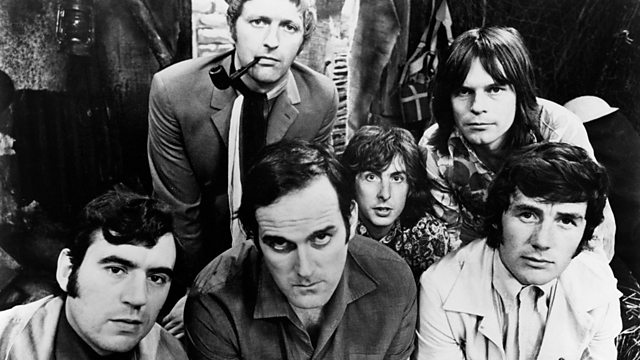 Henning Wehn tells the story of one of the Monty Python team's most bizarre and least known adventures - two special programmes they made exclusively for German television.

Roll up, it's Monty Python's Fliegender Zirkus! This is the extraordinary tale of when the Pythons went Bavarian.

German Comedy Ambassador, Henning Wehn, tells the story of how in 1971 the Pythons were flown into Bavaria, full of new original ideas for sketches, including pieces about the German artist Albrecht Durer, William Tell and The Merchant of Venice. They also adapted the popular Flying Circus Lumberjack Song into German and planned to sing it with the Austria Border Police Choir.

Only Michael Palin and John Cleese were capable of delivering lines in 'understandable' German. Despite extensive language coaching, Eric Idle, Terry Gilliam, Terry Jones and Graham Chapman were virtually incomprehensible. This may have added to the Pythons' trademark absurdity and surrealism, but was somewhat confusing to the German TV audience.

Realising this dream was becoming a nightmare, Alfred Biokek took the decision to make the second programme in English, with German overdub added later. It proved to be a major hit on German TV, but all concerned decided it best not to repeat the experience.

We hear clips from both programmes and Michael Palin, Terry Jones and Alfred Biolek, the man who persuaded them to take their comedy to Germany, talk about how they came up with the material for the German shows - and how life on set began to imitate a Monty Python sketch.

Producer: Jo Meek
An All Out production for BBC Radio 4.