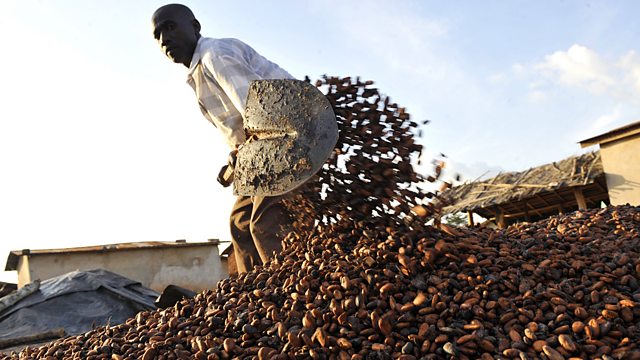 In the UK we eat around three bars of chocolate a week each. Raw cocoa prices have risen dramatically, but Tom Heap finds that higher prices could bring about a sustainable future.

It used to be a treat but now a chocolate bar is one of the cheapest ways to fill up. Chocolate is the unlikely substance at the heart of commodity wars. Cocoa has been reported to be more valuable than gold but will this mean the end of the nation's coffee break.

Over-farming has caused problems in chocolate producing countries in Africa and South America. The pressure to produce cheap cocoa has meant farmers have failed to replant and replenish. Soil has become unusable and mature trees are now reaching the end of their life cycle. Fair trade has been forced on even the biggest producers like Nestle as the only means to get the raw product. But, is it too little too late and is this late interest a real commitment to fair deals for farmers and their land?

There is concern that speculation by financial traders has helped to push up food prices worldwide, creating an unsustainable bubble that makes it even harder for many in the developing world to afford to eat. Workers in the UK have also felt the impact - Burton's Foods blamed higher cocoa and wheat prices for the closure of its Wirral factory - where Wagon Wheels and Jammie Dodgers are made - with the loss of over 400 jobs.

Palm oil is another growing problem. Cheap, easy to grow and lucrative, many cocoa farmers have switched to this crop and turned their land over to monoculture. Costing the Earth investigates the efforts to keep our favourite treat going and asks if this is the first commodity of many to succumb to over-production and unrealistically cheap market prices.