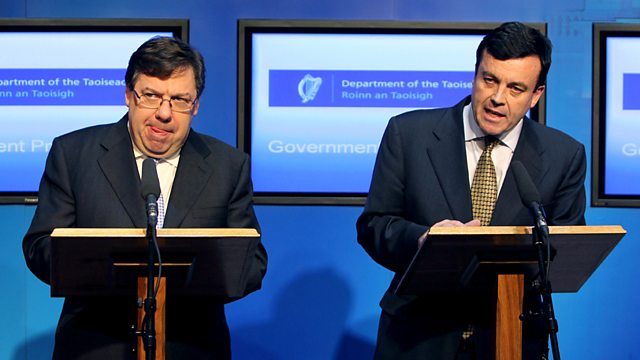 The inside story of Ireland's bailout - a tale of high drama, international diplomacy and, ultimately, political meltdown. Almost six months on, the main players tell their story.

"I have a very vivid memory of going to Brussels on the final Monday and being on my own at the airport and looking at the snow gradually thawing and thinking to myself: this is terrible. No Irish minister has ever had to do this before".

The former Irish Finance Minister, Brian Lenihan, in his first major interview since the Irish bailout last November recalls his feelings as he prepared to sign up to the 85 billion euro bailout - a deal which would end Ireland's economic sovereignty.

"I had fought for two and a half years to avoid this conclusion. I believed I had fought the good fight and taken every measure possible to delay such an eventuality and now hell was at the gates".

Dan O'Brien, the economics editor of the Irish Times, tells the inside story of Ireland's bailout. It is a tale of high drama, international diplomacy and - ultimately - political meltdown.

In the space of just two weeks and two days, the country was transformed. . The Celtic Tiger was dead and Ireland was forced to go with the proverbial begging bowl and accept a multi-billion euro international bailout.

It was an unprecedented situation. Never before had the International Monetary Fund given a bailout to a country that - publicly at least - was insisting it didn't need it.

Dan talks to the main players to uncover the truth of just what happened during those weeks in November and how the deal was reached.

Many believe Ireland was bounced into the bailout by Europe - and in particular the European Central Bank.

"The Irish government decided on its own to seek help. We have not pushed anyone" says Klaus Masuch, the chief negotiator for the European Central Bank.
But Brian Lenihan tells a very different story. "The European Central Bank appeared to have arrived at a view that Ireland needed to be totally nailed down". When asked if the ECB bounced Ireland into a bailout, Mr Lenihan responds: "I would say that, yes".

Dan describes the chaos as teams from the International Monetary Fund, the European Commission and the European Central Bank arrived in Dublin. "There weren't enough desks so for the first few days we just sat with our laptops on the floor" one negotiator says. He hears about the government's fears of widespread social unrest during these weeks as the country lost control of its own finances. And he hears about the 2 am meetings as the international teams struggled to save not only the Irish economy - but the whole future of the euro.