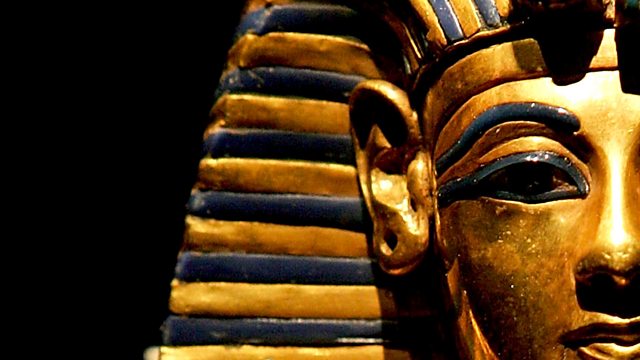 Archaeologist Christine Finn goes in search of sounds not heard for millennia, including Tutankhamun's trumpet. From 2011.

In 1939 the BBC recorded the sound of two trumpets discovered in Tutankhamun's tomb.

It was a nail-biting session; one of them had previously shattered, but the British soldier, James Tappern, who played them allowed the haunting music that had been silent for 3000 years to be heard once more.

For three months this year the recording had added poignancy, as one of the trumpets was among the many artefacts stolen from the Cairo Museum during the recent revolution, though it's now been recovered. Archaeologist Christine Finn, who travelled to Egypt upon news of the uprising and chronicled the looting of archaeological sites, tells the story of the trumpet with the help of Egyptologist, Margaret Maitland.

Christine hears an account of the 1939 recording from Peter Tappern, son of the original bandsman, himself a professional trumpeter. And from archive of Rex Keating, who recorded the event for the BBC in Cairo.

Christine also considers how archaeology has revealed other 'ghost music'. Richard Dumbrill talks about his reconstruction of the Silver Lyre of Ur, discovered by Leonard Woolley in modern-day Iraq around the same time that Howard Carter was excavating Tutenkhamun's tomb. She hears from Domenico Vicinanza of the Lost Sounds Orchestra, an international group which re-creates the sound of ancient instruments using technology and synthesis. One of its first projects was the ancient Greek harp often seen on classical vases, the epigonion; this time the instrument is not a faithful re-creation, but a new model reflecting its 21st century incarnation.

And Christine reflects on the role of these musical, archaeological discoveries in modern composition.