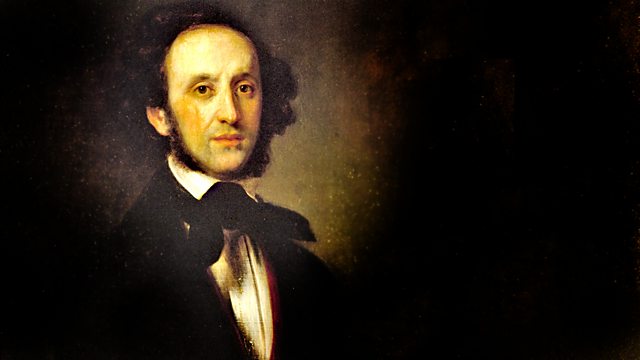 Donald Macleod continues to follow Mendelssohn as he bids farewell to Berlin and turns down a trip to New York, where he had been invited to conduct a Grand Musical Festival.

Donald Macleod continues his exploration of Mendelssohn's last seven years. In October 1844, the composer took the bull by the horns in an audience with his royal employer Friedrich Wilhelm IV, the King of Prussia, and asked to be released from his service to the crown - a grand-sounding, but in practice rather vague position, which had been a source of immense frustration and disappointment to the composer. His request was granted - more or less. Mendelssohn would no longer be required to live in Berlin, and there'd be no fixed duties to perform; just the occasional royal commission. One such commission was to supply incidental music for a performance of Racine's play Athalie (as Donald suggests, the full-blooded choruses give tantalizing glimpses of the opera Mendelssohn might have composed, had he lived long enough). Early in 1845 came a request out of the blue from the other side of the world - the newly-created New York Philharmonic Society was inviting him to go to the United States to conduct a "Grand Musical Festival", with an orchestra of 250 and chorus of 500 at his disposal. Mendelssohn declined - he didn't feel his health would be up to such a long and arduous trip, and he told his brother Paul that undertaking such a venture would be "no more possible than a trip to the moon". Instead, he composed a set of six small but perfectly formed organ sonatas for the British publisher Charles Coventry, and worked on his highly virtuosic 2nd Piano Trio, written in Frankfurt during a freak flood of the River Main; perhaps that's reflected in the stormy opening of the trio's first movement!