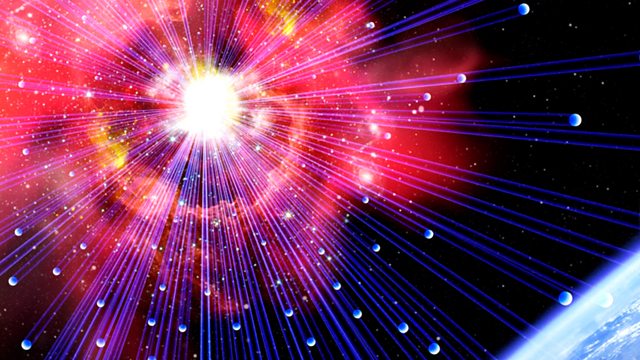 Melvyn Bragg and his guests discuss the neutrino, a mysterious subatomic particle which is one of the most numerous, and least understood, objects in the universe.

Melvyn Bragg and his guests discuss the neutrino.In 1930 the physicist Wolfgang Pauli proposed the existence of an as-yet undiscovered subatomic particle. He also bet his colleagues a case of champagne that it would never be detected. He lost his bet when in 1956 the particle, now known as the neutrino, was first observed in an American nuclear reactor. Neutrinos are some of the most mysterious particles in the Universe. The Sun produces trillions of them every second, and they constantly bombard the Earth and everything on it. Neutrinos can pass through solid rock, and even stars, at almost the speed of light without being impeded, and are almost impossible to detect. Today, experiments involving neutrinos are providing insights into the nature of matter, the contents of the Universe and the processes deep inside stars.With:Frank CloseProfessor of Physics at Exeter College at the University of OxfordSusan CartwrightSenior Lecturer in Particle Physics and Astrophysics at the University of SheffieldDavid WarkProfessor of Particle Physics at Imperial College, London, and the Rutherford Appleton Laboratory. Producer: Thomas Morris.