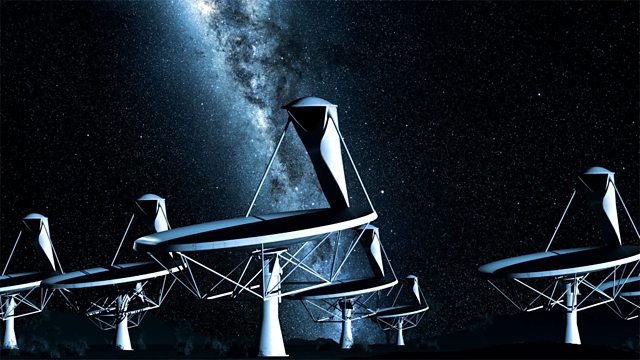 The Biggest Radio on Earth

Plans are advancing for the biggest radio on Earth, an array of up to 3000 radio telescopes across a continent. The Square Kilometre Array (SKA) will have its central core in either South Africa or Western Australia, but its spiral arms of outlying giant dishes will reach out 3000 km across several countries. Astronomer Dr Lucie Green hears how it could search for habitable planets, intelligent life and new-born galaxies.

The ambitious 1.5 billion Euro plan is a partnership between 70 institutions in 20 countries, with its headquarters in Manchester. But wide-open spaces with sparse population and few mobile phone masts are needed to build it. So there is fierce competition between the two remaining short-listed host countries as the time to decide between them approaches. For one proposal, the array would be centred in the ancient desert of Western Australia, with outlying dishes as far away as New Zealand. The other comes to a focus in South Africa's Northern Cape and reaches out to Ghana, Kenya and Mauritius.

The rewards could be, quite literally, astronomical, with 50 times the sensitivity of anything before and the ability to detect alien broadcasts from distant solar systems and even to image the gaps in dusty discs where planets may orbit. But the astronomers also have to justify the cost at times of financial restraint, given that the array will not be complete until 2024. And engineers have to prove that it will be possible - something they've already begun to do by linking together 7 existing radio telescopes in the UK with a new high-speed fibre optic network.