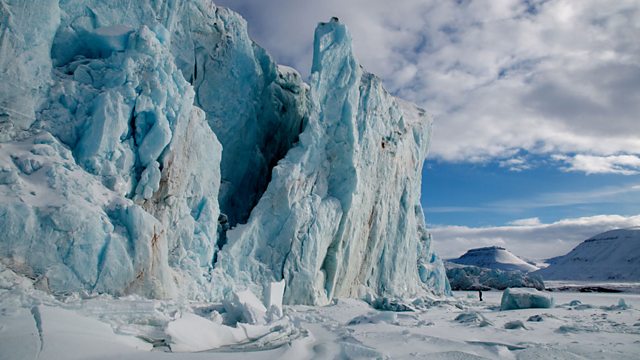 David Attenborough journeys to the poles to investigate what rising temperatures will mean for the people and wildlife that live there, and for the rest of the planet.

David Attenborough journeys to both polar regions to investigate what rising temperatures will mean for the people and wildlife that live there, and for the rest of the planet.

David starts out at the North Pole, standing on sea ice several metres thick, but which scientists predict could be open ocean within the next few decades. The Arctic has been warming at twice the global average, and David heads out with a Norwegian team to see what this means for polar bears. He comes face to face with a tranquilised female and discovers that mothers and cubs are going hungry as the sea ice on which they hunt disappears. In Canada, Inuit hunters have seen with their own eyes what scientists have seen from space - the Arctic Ocean has lost 30% of its summer ice cover over the last 30 years. For some, the melting sea ice will allow access to trillions of dollars' worth of oil, gas and minerals. For the rest of us, it means the planet will get warmer, as sea ice is important to reflect back the sun's energy. Next, David travels to see what is happening to the ice on land. In Greenland, he follows intrepid ice scientists as they study giant waterfalls of meltwater, which are accelerating iceberg-calving events and ultimately leading to a rise in global sea levels.

Temperatures have also risen in the Antarctic - David returns to glaciers photographed by the Shackleton expedition and reveals a dramatic retreat over the past century. It is not just the ice that is changing - ice-loving adelie penguins are disappearing and more temperate gentoo penguins are moving in. Finally, we see the first ever images of the largest recent natural event on our planet - the break up of the Wilkins Ice Shelf, an ice sheet the size of Jamaica, which shattered into hundreds of icebergs in 2009.