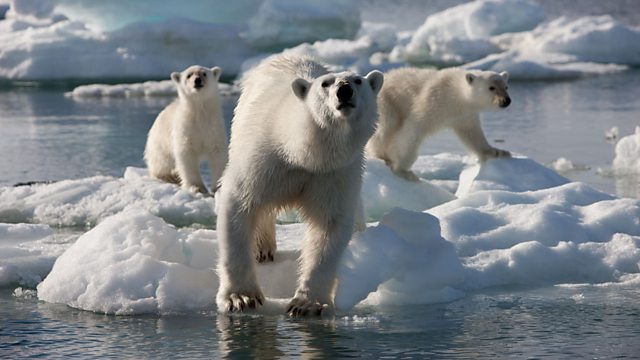 Nature documentary. The impact of summer on polar bears, musk oxen and penguins, who struggle to cope with an unlikely problem - heat.

It is high summer in the polar regions, and the sun never sets. Vast hordes of summer visitors cram a lifetime of drama into one long, magical day. They must feed, fight and rear their young in this brief window of plenty.

Summer is a tough time for the polar bear family, as their ice world melts away and the cubs take their first swimming lesson. Some bears save energy by dozing on icy sunbeds, while others go egg-collecting in an arctic tern colony, braving bombardment by sharp beaks.

There are even bigger battles on the tundra - a herd of musk oxen gallop to the rescue as a calf is caught in a life and death struggle with a pair of arctic wolves. But summer also brings surprises, as a huge colony of 400,000 king penguins cope with an unlikely problem - heat. The adults go surfing, while the woolly-coated chicks take a cooling mud bath.

Nearby, a bull fur seal is prepared to fight to the death with a rival. Fur flies as the little pups struggle desperately to keep out of the way of the duelling giants.

Further south, a minke whale is hunted amongst the ice floes by a family of killer whales. The dramatic chase lasts over two hours and has never been filmed before. The killers harry the minke whale, taking it in turns to wear it down. Eventually it succumbs to the relentless battering. Finally, comical adelie penguins waddle back to their 500,000-strong colony like clockwork toys. The fluffy chicks need constant feeding and protection as piratical skuas patrol the skies. When an unguarded chick is snatched, a dramatic dogfight ensues.

See all clips from Summer (15)