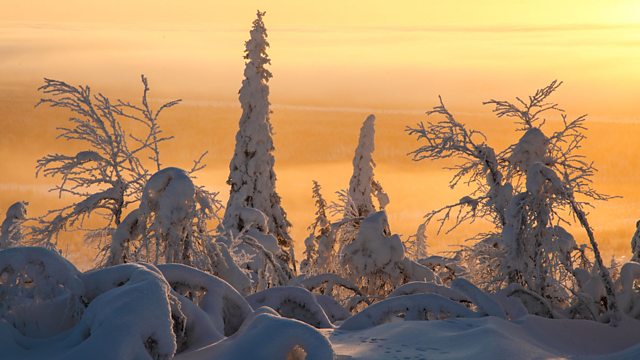 To the Ends of the Earth

David Attenborough sets out on an extraordinary journey across the earth's polar regions, exploring the Arctic and Antarctic.

David Attenborough travels to the end of the Earth, taking viewers on an extraordinary journey across the polar regions of our planet, North and South. The Arctic and Antarctic are the greatest and least-known wildernesses of all - magical ice worlds inhabited by the most bizarre and hardy creatures on Earth.

Our journey begins with David at the North Pole, as the sun returns after six months of darkness. We follow a pair of courting polar bears, which reveal a surprisingly tender side. Next stop is the giant Greenland ice cap, where waterfalls plunge into the heart of the ice and a colossal iceberg carves into the sea. Humpback whales join the largest gathering of seabirds on Earth to feast in rich Alaskan waters. Further south, the tree line marks the start of the taiga forest, containing one third of all trees on earth. Here, 25 of the world's largest wolves take on formidable bison prey.

At the other end of our planet, the Antarctic begins in the Southern Ocean, where surfing penguins struggle to escape a hungry sea lion and teams of orcas create giant waves to wash seals from ice floes - a filming first. Diving below the ice, we discover prehistoric giants, including terrifying sea spiders and woodlice the size of dinner plates. Above ground, crystal caverns ring the summit of Erebus, the most southerly volcano on earth. From here, we retrace the routes of early explorers across the formidable Antarctic ice cap - the largest expanse of ice on our planet. Finally, we rejoin David at the South Pole, exactly one hundred years after Amundsen, and then Scott, were the first humans to stand there.

See all clips from To the Ends of the Earth (17)