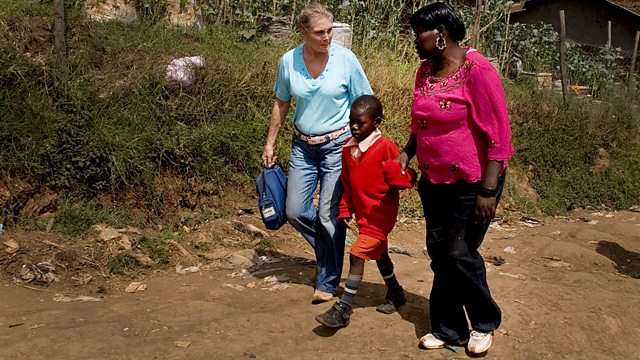 In the second episode of this documentary series exploring life in Kibera, Africa's largest slum, Lenny Henry, Samantha Womack, Reggie Yates and Angela Rippon have already spent three days living in shacks on their own. They're tired, emotional, dirty and hungry - and now they're moving in with some of the locals.

Lenny has been on countless trips to Africa for Comic Relief, and witnessed poverty first-hand. But nothing could have prepared him or the other celebrities for the heartbreaking reality of actually living and surviving in the slums.

This episode sees Lenny move in with a family of orphans - 16-year-old boy Bernard and his four siblings. Samantha stays with 27-year-old Helen, who works in the sex trade. Reggie is placed with cousins Francis and Paul, who are desperate to build a successful life outside of Kibera. And Angela gets to grips with the harsh realities of HIV as she moves in with single mum of six and hair salon owner Caren.

When Lenny finds the experience totally overwhelming, how does he decide to take matters into his own hands? How does Sam find a night out in Nairobi's red light district? What does Reggie do to help Paul realise his dream of success in the music industry? And what does Angela come up with to help Caren's business?

The famous volunteers are pushed to their limit in an attempt to understand what living in real poverty means to billions of people across the globe. All four must come to terms with the physical and emotional difficulties their hosts have to live with and it forces them to question their own lives and priorities.