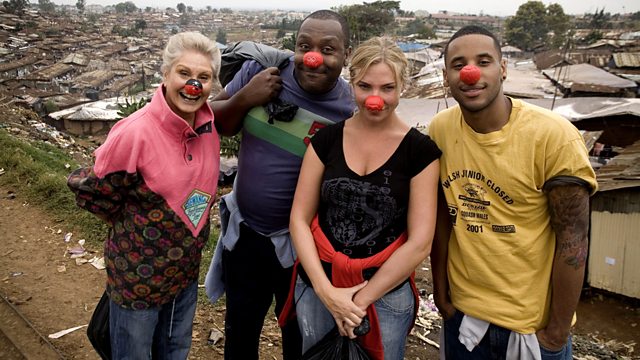 Lenny Henry, Samantha Womack, Reggie Yates and Angela Rippon experience unimaginable poverty as they spend a week living it for real in this ground-breaking documentary.

In 2011, three billion people live in abject poverty, surviving on less than one pound and fifty pence per day. It's a world tough for any westerner to truly understand. Until now. Four well-known personalities and supporters of Comic Relief are about to expose the harsh reality of life for more than half the world's population.

Comedian Lenny Henry, actress Samantha Womack, TV and radio star Reggie Yates and presenter and journalist Angela Rippon agree to swap their lives of privilege and luxury for a week living and working in Kibera- reportedly Africa's largest slum, and one of the most impoverished places on earth.

Stripped of all of their possessions, the four volunteers move into mud shacks to live on their own for three days and nights. How does Lenny cope earning less than two pounds a day making and selling samosas on the streets of the slum? Will Sam return to work after witnessing desperate tragedy during her day cleaning in Kibera hospital? How will Angela react to being offered work as a sex worker, the only way to make money for many women in the slum? The highest paid job in Kibera is cleaning out the public pit latrine toilets - the question is, will Reggie agree to do it?

Each celebrity experiences first-hand just how tough it is to scrape a living in Kibera. The documentary forms part of this year's Red Nose Day programming.