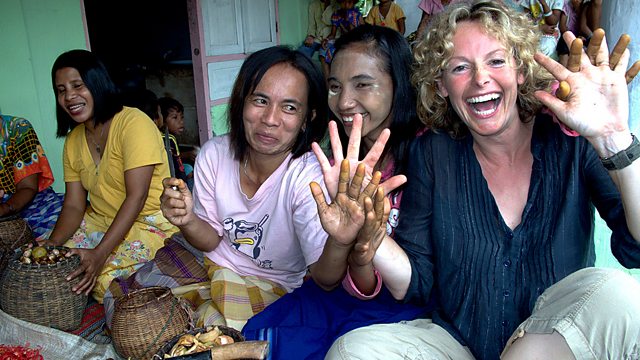 The Spice Trail
Episode 2 of 3

Kate Humble visits the fabled spice islands of Indonesia where she meets people who have rebuilt their lives around the cultivation and trade of nutmeg and cloves.

Kate Humble embarks on a journey around the fabled spice islands of eastern Indonesia in search of two spices that launched epic voyages of discovery, caused bloody wars and shaped empires - nutmeg and cloves. These two spices, grown on an archipelago of tiny volcanic islands, drew European explorers in search of unbelievable wealth, but also led to massacres of local people and the decimation of their culture.

Kate meets the people who have rebuilt their lives and communities around the cultivation and trade of nutmeg and cloves, takes her place on one of the fastest produciton lines in the world, and discovers how the battle for these two spices led to the beginning of the British Empire in North America.

See all episodes from The Spice Trail