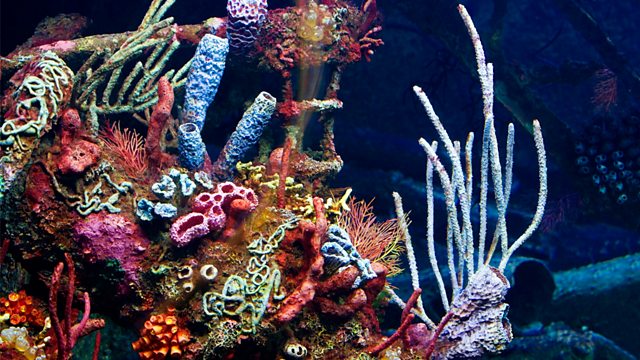 Coral is perhaps the most threatened ecosystem across the world. Climate change is a growing threat but Tom Heap discovers there are signs of hope if man can be kept at bay.

90% of the world's coral is under threat, but could this frontline ecosystem also offer signs of hope?

Ocean acidification is one of the biggest threats to coral but in Egypt tourism also contributes. Much of the coastal resorts waste is pumped directly into the sea and plastic bags litter the sea bed. Step forward eco divers. Volunteers who clean up reefs on their holidays and not just in the Red Sea. Neptunes Army of Rubbish Cleaners dive in Wales to keep the Pembrokeshire marine environment free from litter but can this army of volunteers across the planet really make a difference.

As well as litter coral has also been found to be threatened by noise pollution. Young coral find their way home by listening to the noise of animals on the reef and increasing marine noise threatens their ability to do so.

Climate change is also a factor in ocean acidification but it may not be all bad news. A recent report in Australia suggests that ancient coral which drowned could return to life with warming seas. Further research at the University of Essex suggests that often coral bleaching does not always equate to coral death.

More promising still is research at the University of Exeter where scientists have discovered that some coral in the Arabic Sea, where waters have warmed most quickly so far, has been able to adapt to rising temperatures.

What these fragile structures need most is time and space to recover. Marine conservation zones have worked well on the Great Barrier Reef and in the UK's own territorial waters of Chagos but closer to home in Barra the pressures of conservation versus fishermen's livelihood have become all too apparent.