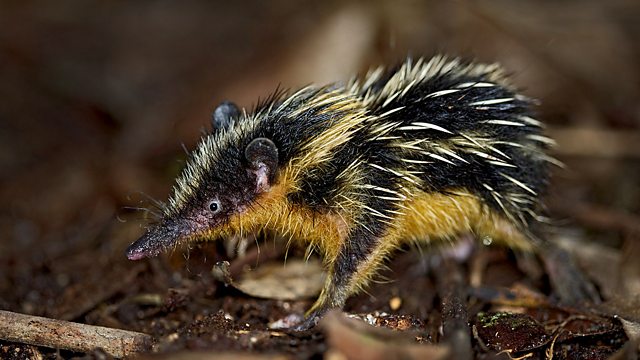 David Attenborough tells the story of one of the most intriguing wild places on earth: Madagascar, the huge island of dramatic landscapes, where the wildlife is strange and unique, some of it having been filmed for the very first time.

In this episode, we travel deep into Madagascar's most luxuriant landscape: the rainforests that cloak the island's eastern mountains. Remote and mysterious, this little-known region of towering peaks and precipitous escarpments is home to over half of all Madagascar's unique species.

Narrated by David Attenborough, this second episode showcases an amazing collection of wildlife, many of which have never been filmed before. Cyanide-eating lemurs, cannibalistic frogs, meat-eating plants, cryptic leaf-tailed geckos, tadpole-eating wasps, tunnel-digging chameleons and house-proud flycatchers are just some of the weird and wonderful wildlife featured.

Along this coast, every cliff and valley is like a lost world where nature has run riot. Amongst the boulders of the Andringitra Highlands, a few hardy troops of ringtailed lemurs make their home. To fight the sub-zero cold, they have developed thick coats and can only survive the freezing nights by huddling together in rocky crevices. In this high 'desert', they must eat cacti for moisture.

Descend just a few hundred metres and it's a very different world, where dense forests are permanently shrouded in clouds. The Marojejy Massif is the last sanctuary of one of Madagascar's rarest lemurs, the elusive, ghostly white silky sifaka. There are thought to be only two hundred of these playful and endearing creatures left on earth.

Lower again are the lush rainforests of Ranomafana, where thickets of bamboo hide one of Madagascar's most remarkable animals, the golden bamboo lemur, only discovered recently. It's incredibly specialised, eating just one species of bamboo, a plant loaded with highly toxic cyanide. No one knows how they can survive consuming lethal doses of this poison.

Land of Heat and Dust

See all episodes from Madagascar

See all clips from Lost Worlds (7)