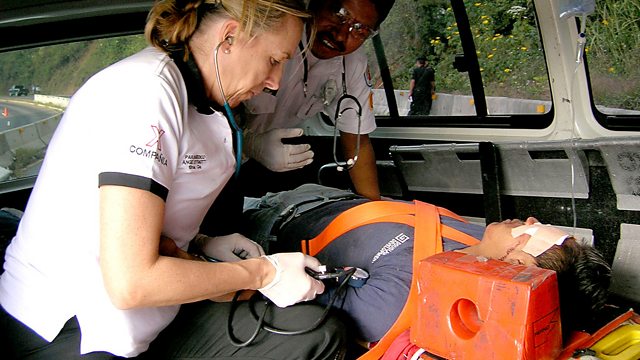 Angie Dymott, a paramedic from Cardiff, spends two weeks with ambulance workers in Guatemala City - a place with one of the world's highest violent crime rates.

Angie Dymott is leaving her job as a paramedic in Cardiff, South Wales, to join the Bomberos of Guatemala City, capital of Guatemala and one of the most murderous places on earth.

For two weeks, she will live and work with the Bomberos, combined paramedics and firemen, as they race to the scenes of gangland killings and drive-by shootings, trying to save lives and to stay alive. She will swap her roomy, high-tech, state-of-the-art ambulance for a cramped minibus.

As the drug barons fight it out and innocents are caught in the crossfire, Angie will see more bloodshed and killings in a few days than in all her years on the job in Wales.

Decades of civil war and increasing drug-related violence have left this Central American country close to chaos. The murder rate is bucking the global, downward, trend, and rising every year. Recently a leading international monitoring organisation described Guatemala as 'a paradise for criminals.'

As she contemplates her departure, Angie is scared, not just of the violence but of failing her new colleagues. She knows she's a competent paramedic in the UK, but in Guatemala? Will she cope? Will she be a useful member of the team or merely a hindrance?

See all clips from Paramedic (6)