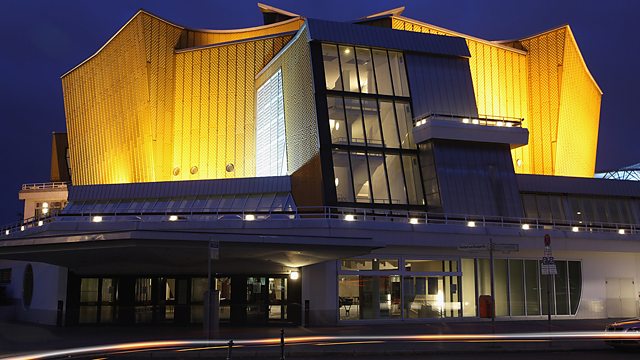 In February London will be going 'Rattle-mad'. Sir Simon will be bringing over his Berliner Philharmoniker players for four concerts, very special events that have been sold out for months. BBC Radio 3's Afternoon on 3 has also caught Rattle fever and gives listeners a unique chance to hear the orchestra at home in Berlin's famous Philharmonie concert hall. Thanks to our colleagues in the European Broadcasting Union we can enjoy music from the concerts that the orchestra and their charismatic Chief Conductor will be giving immediately prior to their London trip, including some of the music they'll be bringing with them. There are two symphonies by Mahler in this, the 100th anniversary year of his death - the giant, all-consuming 3rd and the gentler, more pastoral 4th. There is music by another composer for whom Rattle is a special champion, Stravinsky, and Schubert's gloriously lyrical 9th Symphony.
And as if this wasn't enough, alongside the Berlin concerts Afternoon on 3 will be presenting music from one of the undoubted highlights of the European concert season, the Lucerne Festival. The outstanding events in the 2010 festival included two appearances by Rattle's predecessor in Berlin, the great Italian conductor Claudio Abbado. He conducts the extraordinary youthful Simon Bolivar Orchestra from Venezuela in Tchaikovsky's final symphony, the 6th, and is also on the podium for a performance of Beethoven's opera Fidelio. The cast is headed by the leading Swedish soprano Nina Stemme and the German tenor who has been garnering glowing reviews all over the world, Jonas Kaufmann. Music-making doesn't get much more prestigious than this.
Radio 3 brings two of Europe's finest concert-halls to your home - admission free!