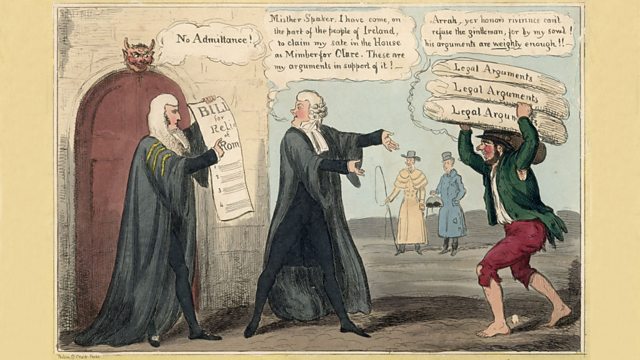 Jonathan Freedland takes the long view of policy reversals in politics, comparing the Lib Dem position on tuition fees with Robert Peel's reversal over Catholic emancipation in the 1820s.

In 1829, Peel performed a sudden volte face over rights for Catholics, sparking a by-election in Oxford. The hitherto anti-Catholic Sir Robert - nicknamed 'Orange Peel' for his staunch opposition - was roundly condemned for his u-turn. At the heart of this bitterly fought campaign was the question of when it's acceptable for statesmen to change position on crucial policy issues.

Jonathan is joined in Oxford by former Lib Dem MP Evan Harris, journalist Anne McElvoy and former Defence Secretary Bob Ainsworth to the discuss the balance of pragmatism and principle in politics.

Producer: Laurence Grissell.
Image: May 1829: Irish politician and activist Daniel O'Connell (1775-1847, centre) arrives to take his seat in Parliament after the passing of the Catholic Emancipation Act in April 1829. The act made Catholics eligible for a wide range of public offices including that of Member of Parliament. Looking on from the middle distance are British Prime Minister the Duke of Wellington (1769-1852) and Home Secretary and leader of the House of Commons Sir Robert Peel (1788-1850).