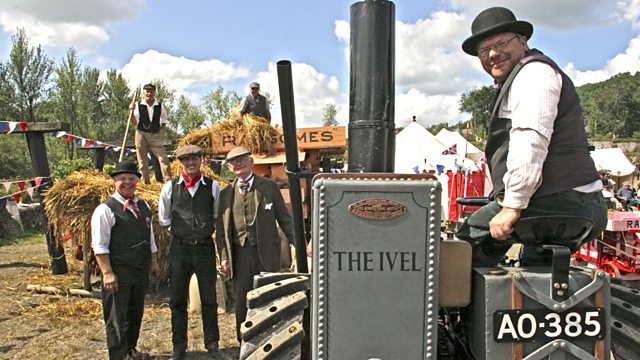 August brings the climax of the farming year, and the end of 12 months on the Edwardian Farm for the team. They must harvest their oat crop, but everything depends on the weather.

August brings the climax of the farming year, and the end of 12 months on the Edwardian Farm for archaeologists Alex Langlands and Peter Ginn and historian Ruth Goodman.

The team must harvest their oat crop, but everything depends on the weather. Constant rain is making the job impossible. It is crucial to be able to predict when a dry spell will come so that they can be prepared to swing into action. They investigate ways of forecasting the weather and embark on creating a weather vane. Peter tries his hand at the art of repousse to make a copper cockerel for the vane, and the team heads for the woods to do a traditional charcoal burn in order to smelt iron for the compass points.

To celebrate the end of harvest, the whole town enjoys a grand fete sporting new innovations such as the electric light bulb, the latest threshing machines, the petrol-powered Lister engine and a genuine flying machine.

The Edwardian era ended with an event that changed the countryside forever - the First World War. Michael Morpurgo, author of the play War Horse, comes to the farm to give Alex, Ruth and Peter an insight into the consequences. Although the human cost was dreadful, the growth of mechanization meant many rural areas had labour to spare. But over a million horses were also drafted into service - and only 60,000 came back - paving the way for tractors to finally replace horse-power. Farming would never be the same again.