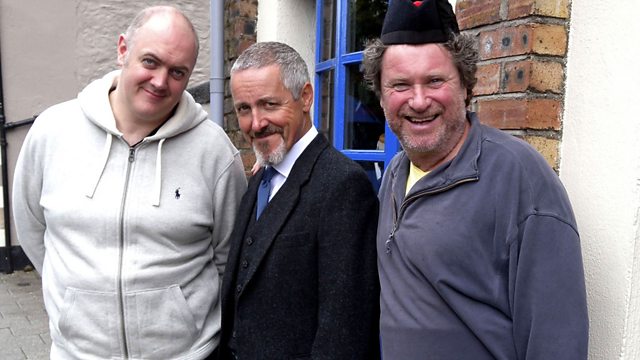 Griff Rhys-Jones, Rory McGrath and Dara O Briain head to the Hebrides for another adventure on the high seas. They visit Fingal's Cave and then head out to the Knoydart Peninsula.

Griff Rhys-Jones, Rory McGrath and Dara O'Briain head to the Hebrides for another adventure on the high seas, sailing around some of the prettiest and most remote seascapes in the British Isles. Since none of the three men in a boat have any particular connection to Scotland, they decide to use the 16th-century travels of dictionary writer Dr Johnson and his biographer James Boswell as inspiration.

In particular Rory is inspired by Boswell's record of everything he drank, and decides to try and visit as many distilleries as possible. Their journey takes them across the Western Isles, to the isles of Jura, Mull, Skye and finally Harris, where they hope to catch the last week of the wild salmon fly fishing season.

They start by catching the ferry from Oban to Mull, where they visit Fingal's Cave, inspiration to so many writers, artists and musicians like Felix Mendelssohn. They leave Mull onboard Mascot, a 1904 Bristol Pilot Cutter, but immediately run into trouble as they get tangled in a lobster pot. They then sail along the coast to the Knoydart Peninsular, where they are shown how to survive, before finding Britain's most remote pub.

Dara offers to give his friend, comedian and mountaineer Ed Byrne, a lift to the Cullins on Skye. He is trying to climb as many Scottish mountains as he can. They sail north, but realise they're running out of time. So they catch a lift with the Scottish Fisheries Protectorate Ship Norna, finally making the last week of the fishing season at Amhuinnsuidhe Castle on Harris, a place that has been described as 'heaven on earth'.

See all episodes from Three Men