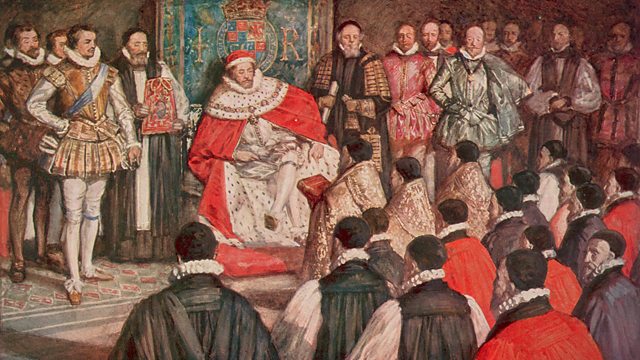 James Naughtie on the enduring place of the King James Bible in British culture.

The King James Bible is everywhere. We see it in hair commercials, film titles, novels, music, even in the way we speak. It is lauded with praise as "The great monument to English Prose." But how and why has it achieved such a status? What is its significance in the English speaking world? In the final programme to mark the 400th anniversary of its publication, James Naughtie assesses the legacy of the King James Bible.

He begins in the pub. James meets linguist and Renaissance scholar Gordon Campbell, the Jamaican poet Kei Miller and Rachel Holmes from the Southbank centre to discuss the surprising and unusual places we hear of the King James today. "Salt of the earth", "skin of their teeth", "Apple of his eye" are all phrases that
have come into the English language through the King James Bible, but do any of the drinkers in the pub know this?

The King James Bible became part of our everyday speech because of the role that Christian belief and practice has played in our national story. Jim will meet Giles Fraser at St. Paul's Cathedral to discuss the central place of the Bible and Christianity within British culture. For 300 years the King James Bible reigned supreme. Nearly everyone went to church and the King James Bible was the only translation to be used. Preachers would draw crowds of over a thousand and the words of the King James gradually worked their way into the bloodstream of all those in the country.

Today most people don't attend church, but they will come across the King James in one of the most famous pieces of music the world has ever known, Handel's Messiah.
Handel and Charles Jennens, who composed the libretto for Messiah, were accused of blasphemy for staging a sacred work in the immoral world of the theatre. They had moved the Bible away from its original place and purpose and reinvented it for a changing audience. But today Handel keeps the King James Bible in our hearts and minds like no other artist. His oratorios are the conduits through which the Bible comes to us.

The KJB was the book of the Empire. Where the empire spread, the Bible spread and that Bible was the KJB. Back in the OBE chapel at St. Pauls, James discusses the spread of the King James Bible through the Empire.

It was used both to defend and challenge the slave trade. When slaves learnt to read, they read the Bible in a whole new way. They read the story of the Exodus and the Sermon on the Mount and changed the way the world thought. The KJB would be used in the abolition addresses of Abraham Lincoln, in the famous speeches of the civil rights movement and in the writings of African-American authors. The tool of oppression became the tool of liberation.

In the late 19th Century the demand for a more accurate and a more accessible translation of the Bible became apparent. This led to the publication of The Revised Version in 1881. Keeping very much in the tradition of the King James Bible, it posed no immediate threat but it did open the flood gates for numerous translations which appeared throughout the 20th Century. Today in churches it is the RSV, NIV and Good News that reign supreme; the King James is like the best china which is only brought out for special occasions.

The KJB has become one among many, serving a consumerist society. What is important to Christians now is not the elegance of the language but the ability to understand. People want a Bible which is suitable for them.

So where is the support for the King James Bible today? Rather surprisingly its keenest proponents today are secularists. They praise it for the beauty of language, extol its place within our culture and vehemently campaign for it to be taught in schools and universities but as a work of literature rather than a work of God.

Knowledge of the King James Bible may be waning, but its place in our culture is secure. It can still be used for religious devotion but its impact is far wider reaching. It has a great power to challenge and subvert but also to amuse and entertain. It constantly reinvents itself for new audiences and situations. The KJB is very much alive today and pops up in the most surprising of places.

The Translation—The Story of the King James Bible