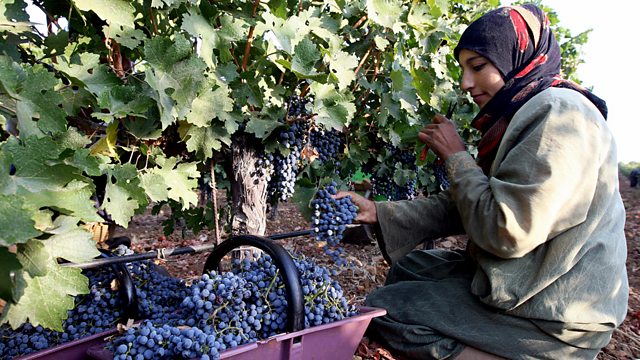 Vines On The Front Line

In a country better known for war than wine, journalist Jeremy Bowen meets the winemakers of Lebanon. From 2011.

"The message from a glass of Lebanese wine should be tolerance and openness between civilizations. It's more than fermented grape juice." Ramzi Ghosn, Massaya Wines.

The BBC's Middle East Editor, Jeremy Bowen, takes time out from reporting conflicts to give vinophiles a new perspective on an ancient story. Lebanon is not a place you naturally associate with winemaking.

It's a Middle Eastern country nestled between Arab neighbours whose religion forbids them to drink alcohol. It is also a country that has been scarred by war, from the 15-year civil war from 1975-1990, to the recent Israeli-Lebanon conflict in 2006.

But Lebanon is also an ancient civilisation, a country of merchants and traders - its history dating back to Noah, the first winemaker in the Bible. Fittingly the Temple of Bacchus, an impressive tribute to the God of wine, is situated amongst the ruins of Balbek, in the Bekaa Valley, a region these days better known for Hezbollah than hedonism. But the temple, like Lebanese wine, has survived centuries of war and the winemakers of the Bekka are optimistic wine will outlive war.

Sharing stories with the wine makers who, in defiance and dedication to their craft, continue to grow their vines so close to the frontline, Jeremy delves into the cultural and ethnic mosaic of this unstable but extraordinary country.

An All Out production first broadcast on BBC Radio 4 in 2011.