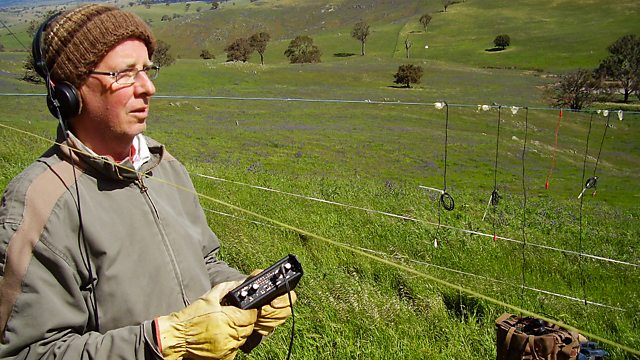 The Music of the Wires: wildlife sound recordist Chris Watson is captivated by the extraordinary sounds of the wind and the weather as they play on vast lengths of fencing wire stretched across the Australian landscape.

Alan Lamb is an artist, biomedical research scientist and composer who has long been fascinated by the vibrating qualities of telegraph wires. As a young boy he was introduced to the music of the wires during walks with his sister and their nanny, who showed the children how to press their ears against a telegraph pole to 'hear the sound of the world'.

Years later, when he was a student on a camping holiday in Mull, Alan pulled into the side of the road and fell asleep in his van. He was woken by an extraordinary sound. It was produced by the telegraph wires overhead as they waxed and waned in the wind. Alan was transported by the sounds and became determined to record their music.

Since then, he has worked with abandoned telegraph wires on several sites across Australia and installed new structures in order to produce and record music from them. Alan has also completed extensive research into auditory perception and developed theories relating to the wire music and its behaviour.

In this programme, wildlife sound recordist Chris Watson, who has long been interested in the sounds of the wind, travels to Australia to meet Alan Lamb and some of his colleagues at The Wired Lab Project. He discusses their work and its evolution and records for himself some of the extraordinary music of the wires.