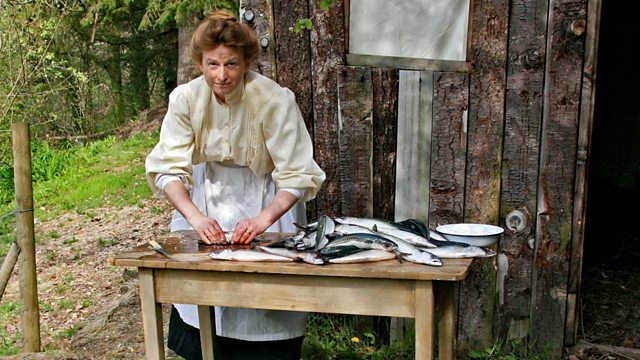 It's April and the fishing season has arrived. Alex and Peter go to sea in an Edwardian trawler. Ruth stays ashore and prepares potted shrimp.

It is April and the fishing season has arrived - a time when Devon's 'fisherman-farmers' went to sea.

Alex Langlands and Peter Ginn go to sea in an Edwardian trawler, hastily finishing repairs before setting sail. They master the singing of sea shanties as well as steering a wind-powered vessel and casting a net the old-fashioned way - but will they catch any fish?

Women were considered bad luck at sea, so Ruth Goodman stays ashore. She forages on the se shore and prepares potted shrimp. She also builds a smokehouse and smokes some mackerel.

Peter and Alex drive their herd of cattle along a dangerous drove road to find new pasture, and prepare for the birth of the herd's first calf.

Alex makes a coracle that Peter tests out on the pond, and Ruth explores one of the growing fashions of the Edwardian era by holding a seance.