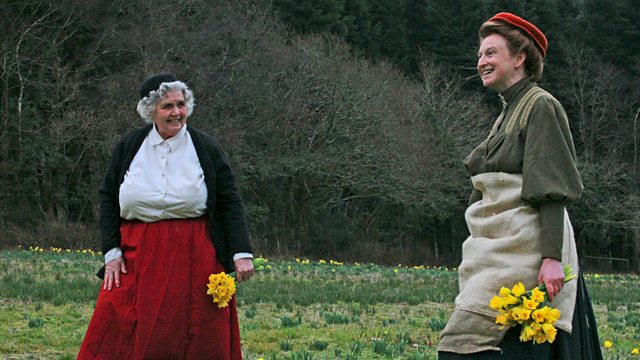 It is March, and Ruth Goodman, Alex Langlands and Peter Ginn greet the long-awaited arrival of spring. It is time to bring in the daffodil harvest.

It is March, and Ruth Goodman, Alex Langlands and Peter Ginn greet the long-awaited arrival of spring. It is time to bring in the daffodil harvest. During its heyday in the early 20th century, the Tamar Valley was the largest producer of early daffodils in Britain - the result of the region's mild climate combined with the arrival of a railway, which meant produce could be delivered to towns and cities across Britain within hours of being picked. The team takes their daffodil crop to the train station and gets to grips with the workings of the Edwardian steam-powered railway system.

Ruth's daughter, Eve, arrives on the train to spend Mothering Sunday - an important occasion in the Edwardian calendar - on the farm. For the many daughters who worked away in service, it was the only time in the year when they could get time off to return home.

Alex and Peter fertilise the potato crop - which requires ten tonnes of well-rotted horse dung. They also go up to Dartmoor for the annual pony trek - a time when wild ponies on the moor were rounded up. They select a new pony for the farm.

The pony needs training before he's fit for work, and Mike Branch, a specialist trainer from Tennessee, arrives. He's following in the footsteps of American farmer John Solomon Rarey, who in the 19th century found fame and fortune in Britain with his revolutionary method of taming wild horses. Instead of 'breaking' the horse physically, he used the technique now known as 'horse whispering'.

After a bumper daffodil harvest, and having seen all the ewes successfully give birth to their lambs, the team are in high spirits for the celebration of Easter - which means feasting, a special church service and a surprise for Ruth.