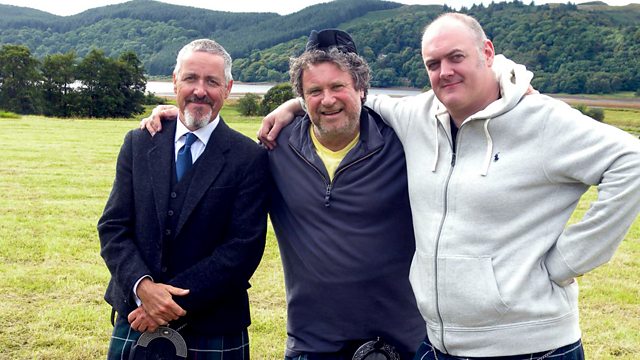 Griff Rhys Jones, Rory McGrath and Dara O Briain head to the Hebrides for another adventure on the high seas, sailing around some of the most remote seascapes in the British Isles.

Griff Rhys Jones, Rory McGrath and Dara O Briain head to the Hebrides for another adventure on the high seas, sailing around some of the prettiest and most remote seascapes in the British Isles. Since none of the three men in a boat have any particular connection to Scotland, they decide to use the 16th-century travels of dictionary writer Dr Johnson and his biographer James Boswell as inspiration.

In particular Rory is inspired by Boswell's record of everything he drank, and decides to try and visit as many distilleries as possible. Their journey takes them across the Western Isles, to the isles of Jura, Mull, Skye and finally Harris, where they hope to catch the last week of the wild salmon fly fishing season.

Their first boat turns out to have wings, as they catch the Seaplane from Glasgow to the end of the Crinan Canal. It's here that Vic 32 awaits, one of the last surviving coal-fired steam puffers. Their first task is to light the boiler and wait for it to get to temperature. In the meantime they decide to have a go at the Kilmore Highland Games, which means getting kitted out in full Highland attire. Dara takes on the ladies' hammer-throwing champion and Griff takes part in a rowing race.

The Puffer then takes them to the start of a West Highland Week race, one of Scotland's biggest yachting events. The boys take control of a William Fife yacht built in 1910, competing alongside 100 other yachts. But after a near pile-up at the first buoy, the race result is protested by several yachts.

See all episodes from Three Men