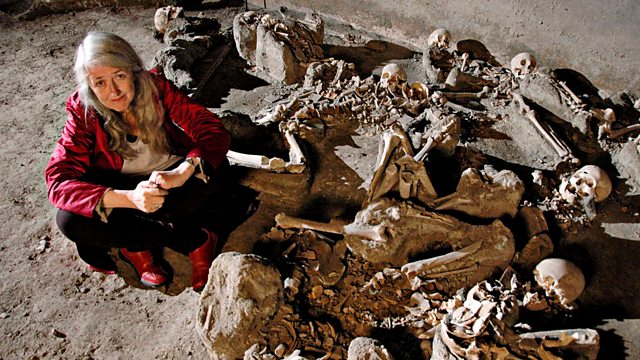 Pompeii: Life and Death in a Roman Town

Pompeii: one of the most famous volcanic eruptions in history. People know how its victims died, but this film sets out to answer another question - how did they live?

Pompeii: one of the most famous volcanic eruptions in history. We know how its victims died, but this film sets out to answer another question - how did they live? Gleaning evidence from an extraordinary find, Cambridge professor and Pompeii expert Mary Beard provides new insight into the lives of the people who lived in the shadow of Mount Vesuvius before its cataclysmic eruption.

In a dark cellar in Oplontis, just three miles from the centre of Pompeii, 54 skeletons who didn't succumb to the torrent of volcanic ash are about to be put under the microscope. The remains will be submitted to a barrage of tests that will unlock one of the most comprehensive scientific snapshots of Pompeiian life ever produced - and there are some big surprises in store.

Using the latest forensic techniques it is now possible to determine what those who perished in the disaster ate and drank, where they came from, what diseases they suffered, how rich they were and, perhaps even more astonishingly, the details of their sex lives.

The way the remains were found in the cellar already provides an invaluable clue about the lives of the people they belonged to. On one side of the room were individuals buried with one of the most stunning hauls of gold, jewellery and coins ever found in Pompeii. On the other were people buried with nothing. It looked like the stark dividing line of a polarised ancient society - a room partitioned between super-rich and abject poor. But on closer examination the skeletons reveal some surprises about life in Pompeii, of a place where slaves could eat a diet as rich and healthy as their masters, where colour was not a barrier to privilege or success and where even the poor could enjoy a standard of healthcare not realised again for another 18 centuries.

Mary takes us on journey from the cellar to a small ancient town which nevertheless boasted more than 50 fast food joints, dozens of rowdy bars, a 200-foot-long swimming pool and even its own brothel. The film opens the lid on this most famous of ancient towns to reveal Pompeii as it's never been seen before.

See all clips from Pompeii: Life and Death in a Roman Town (2)