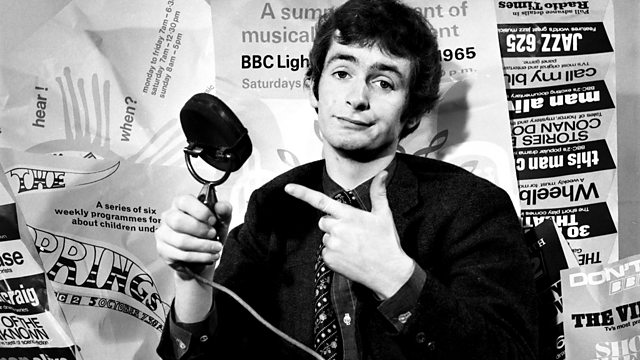 Paul Gambaccini explores how, and why, Kenny Everett fell under the spell of radio and celebrates his legacy, with many examples of the DJ having fun on the wireless.

Kenny Everett's first love was always "the wireless" because he knew the pictures would always be better when you listened to his wildly imaginative features on the radio. Paul Gambaccini explores how, and why, Kenny fell under the spell of radio and celebrates his legacy, with many examples of the DJ having fun on the wireless.

Wireless Kenny Everett covers his first approach to the Beeb; broadcasting on pirate Radio London; finding Where It's At on the Light Programme; and the innovation - and trouble - he created at Radio One. There will be comments from Kenny's early BBC champions Johnny Beerling and Angela Bond. His pirate and Capital Radio colleague Dave Cash will also discuss Kenny's craft.

The creation of what Everett called "the fiddly bits" has had an enormous impact on generations of DJs. Kenny loved the technical side of radio and used phasing, stereo trickery, editing and sound effects to create his memorable jingles, 'Singalonga Beatles tracks' and audio competitions. Inspired by the 1950s radio adventures of Journey Into Space, Kenny also created his own sci-fi serial - "with smut, jokes and sound effects" - Captain Kremmen.

His other characters included Chris P. Bacon, Rock Salmon (Masked Accountant), his "Gran" and butler Crisp. This combination of humour with innovative production impressed DJ Steve Wright, who describes the impact of Kenny's shows upon him.

Kenny's love of music was always at the forefront of his programmes. His shows bubbled with surprises: from the "tuney" bits from classical music, to the awful but hilarious Bottom Thirty records suggested by his listeners for The World's Worst Wireless Show.

This documentary first broadcast on Radio 2 in December 2010.