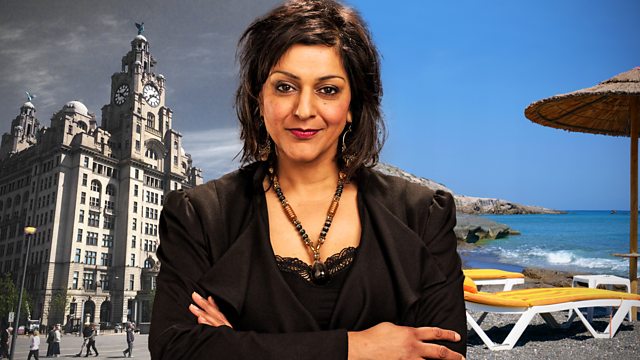 4 Extra Debut. When middle-aged Liverpool housewife Shirley gets the chance to travel, her world begins to change. Stars Meera Syal.

Shirley Valentine is a middle-aged Liverpool housewife, who reveals her innermost thoughts and fears in a manner that is both insouciant and poignant. Once an incorrigible anti-establishment rebel, Shirley now chafes under the plodding insensitivity of her husband, Joe and the stultifying pace of her suburban routine. Her life enters a new and exciting phase when, after her best friend, Jane, wins an all-expenses-paid vacation to Greece, Shirley is given the opportunity to travel to faraway places without her husband; she begins to see the world, and herself, in a different light.

Starring Meera Syal, after a much lauded run at the Menier Chocolate Factory the play transferred to The Trafalgar studio to continued success. Finishing in theatre on October 30th Meera walked straight into the studio to record the one woman play for Radio 4. Based on the original Menier Theatre production directed by Glen Walford.

David Dodge - To Catch a Thief