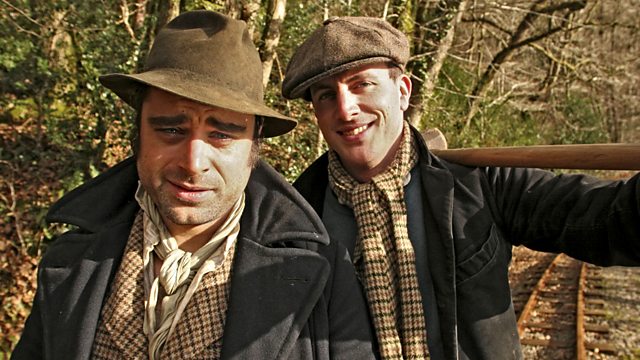 Archaeologists Alex and Peter and historian Ruth try Edwardian life for a year. Alex and Peter go down a copper mine, just a few hundred yards from their cottage.

Archaeologists Alex Langlands and Peter Ginn go down a copper mine, just a few hundred yards from their cottage, which was once the major source of Morwellham Quay's wealth. In the 19th century, the largest deposit of copper in Europe was discovered in Devon. And the mining industry made Morwellham the busiest inland port in Britain. In the latter half of the century rising costs and cheap foreign imports put the copper mining industry into decline. But resourceful Devon farmers found other ways to extract income from copper - such as 'fossicking' (literally scavenging by breaking up rocks overground) and building precipitation tanks which extracted copper deposits from the water which flowed out of the mines.

Meanwhile, historian Ruth Goodman learns the art of lacemaking, visiting the town of Honiton which became world famous for its lace, renowned for its beauty, delicacy and intricacy. Once half the inhabitants of east Devon were lacemakers.

The boys also go tin mining in Cornwall, an industry which survived until the end of the 20th century when the last mine closed in 1998. But it's a gruelling trade, full of risks. They drill blast holes by hand and get to grips with tools such as the grimly nicknamed 'the widow-maker'.