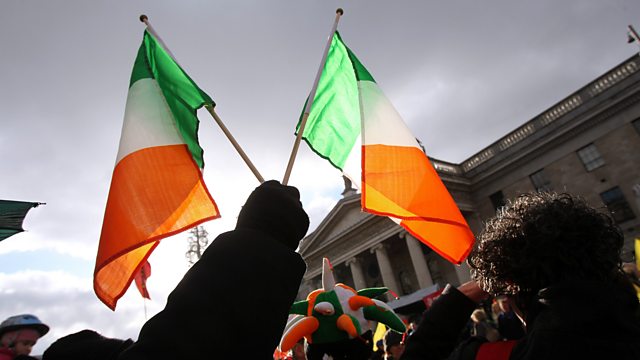 How much will British taxpayers suffer from the economic fallout in Ireland? Morland Sanders hears from communities affected and reveals the extent of Irish bad debts in Britain.

How much will British taxpayers suffer from the fallout in Ireland? British banks such as RBS and Lloyds have large debts in the Republic, and are making decisions about which to call in, threatening more pain for local communities. Morland Sanders hears protests from small contractors in Donegal where Ulster Bank want to sell off a prestige residential development at rock bottom prices. This amid questions about the part British institutions actually played in fuelling the property market bubble.

As the Irish government deals with the "toxic loans" of the Republic's banks, it's being estimated that 15% of them are in the UK. We explore how this will affect the businesses reliant on that borrowed money, and what will happen to those trophy assets such as Claridges, now 'owned' by the Republic's new holder of its toxic debts, NAMA.

The Chancellor, George Osborne may have said the £3.2bn loan to Ireland was to support a friend in need, and protect British exports, but we report on the importance to British banks and British businesses of an economic recovery in Ireland.