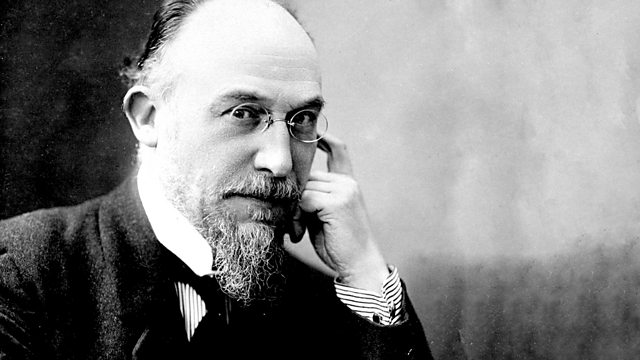 Sarah Walker retraces the journey Satie made each day across Paris in order to earn a living playing cabaret music. She learns how it influenced his music.

Composers don't come much odder than the Frenchman Erik Satie (1866-1925). His music - from slow meditative pieces to fast jokey ones with a flavour of the cabaret - was astonishingly individual; and his way of life was just as weird. Not least because he never had any money.

In 1898 Satie moved from the heart of bohemian Paris to the obscure suburb of Arcueil. No doubt he was desperate to save money - but he also liked the idea of cutting himself off from the musical establishment. Every day for a decade or more he would walk the 10 kilometres north across the city to earn a meagre living playing the piano in the cabarets of Montmartre. If he missed the last train - or couldn't afford it - he'd walk home again at night. He walked, he looked, he listened - and he spent plenty of time in cafes, where he drank, talked to friends and strangers, and even wrote music.

Sarah Walker retraces Satie's footsteps from Arcueil to Montmartre - and uncovers the secrets behind his unique music: in the people and street life of Paris, its cafés and cabarets, and in the very act of walking itself.

Nights in a Divided Spain