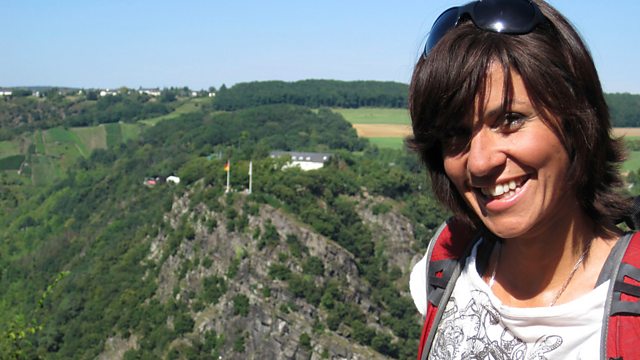 Julia Bradbury explores the landscape of Germany and its synonymous cultural movement, Romanticism. She begins with a two-day walk along part of the Upper Middle Rhine.

Julia Bradbury takes her boots and backpack to the Continent to explore the landscape of Germany and the cultural movement that made it famous - Romanticism.

The Germans enjoy a relationship with walking that has lasted over 200 years. The exploration of their landscape has inspired music, literature and art, and Romanticism has even helped shape the modern German nation, as Julia discovers. By walking in four very different parts of Germany, she explores river valleys, coastlines, mountains and gorges, following in the footsteps of Richard Wagner, Caspar David Friedrich, Johannes Brahms as well as British Romantics like William Turner and Lord Byron. This is Julia's chance to discover her own sense of wanderlust.

Julia kicks off her tour with a visit to the 'Romantic Rhine', recognised as a must-see of modern Germany, with her two-day walk exploring the most stunning part of the Upper Middle Rhine. Surrounded by castles, vineyards and medieval villages, the Rhine is an obvious walking gem, yet until 200 years ago it was regarded as little more than a great transport artery. Julia sets off along the river, exploring the 19th century transformation that turned the Rhine into the pin-up of Romanticism and the emblem of the German nation.