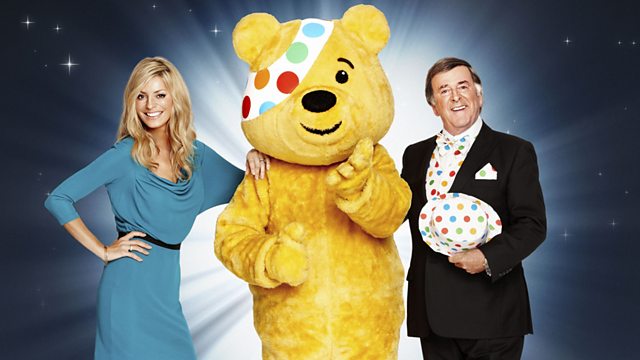 The fundraising spectacular continues, as the BBC newsreaders recruit dance supremo Louie Spence to create a headline-grabbing routine, and the 2010 total is revealed.

The BBC newsreaders recruit dance supremo Louie Spence to create a headline-grabbing routine, and temperatures rise in a Come Dine With Me Dragons' Den special.

The party continues all over the UK as Irish favourites The Script raise the roof at The Odyssey in Belfast, plus Peter Andre performs a thrilling tribute to Michael Jackson.

The cast of Priscilla put on a show-stopping performance live in the studio, and the stars of Loose Women sing their version of a Girls Aloud classic.

Blue Peter adventurer Helen Skelton takes on the role of Baby in the hit musical Dirty Dancing and McFly rock the Scottish Exhibition Centre in Glasgow.

An exclusive Children in Need performance from West-End smash Phantom of the Opera.

Get ready for Pudsey's Greatest Hits, a celebration of Children in Need's most memorable moments from the last 30 years.

Plus the grand total for the 2010 fundraising spectacular is revealed.