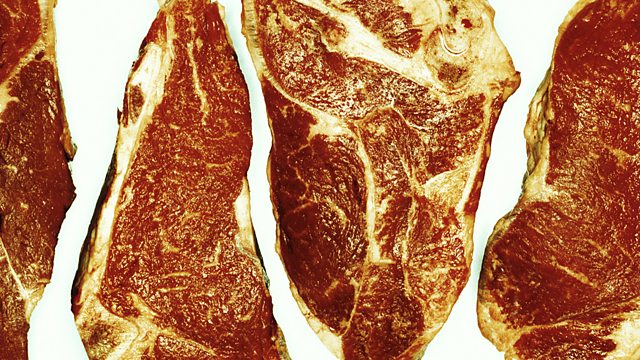 At a time when we're being told that livestock production is an inefficient and unsustainable use of resources, Geoff Watts consider progress in developing synthetic alternatives.

It doesn't look like the start of a revolution in meat production, but some small scraps of pig muscle tissue growing in a laboratory at the University of Maastricht in the Netherlands could be just that. Professor Mark Post and his research team are the first to persuade cells taken from the muscle fibres of a live pig to carry on growing in dishes in the laboratory. And muscle is meat. With increasing pressure on food supply in the future and growing criticism of meat as an inefficient and environmentally costly way to make food, Geoff Watts looks at the science behind the idea of growing artificial meat.

He visits Maastricht to see the muscle tissue. It is on a very small scale at the moment, limited by cost and the current production technique, but Professor Mark Post is optimistic about scaling up their system, and believes it is just a matter of time and money. He does have more reservations about how long it will take to change the present short, thin strips into something with the texture and taste of real meat though.

Geoff Watts talks to meat expert Emeritus Professor Jeff Wood at the University of Bristol about the exact nature of texture and taste in meat, and observes how a consumer taste panel assesses meat. It turns out to be surprisingly difficult, and still impossible to say why meat tastes the way it does. Jeff Wood says it is every bit as complicated and subtle as tasting wine, and he is sceptical that an artificial product can ever be as good as the real thing. Mark Post refuses to be daunted by his task though, and believes the technology is at the same stage as computer technology several decades ago. He agrees it is an unromantic way to produce meat but thinks it might be a question of "needs must" in the future.

The end of Moore's Law?