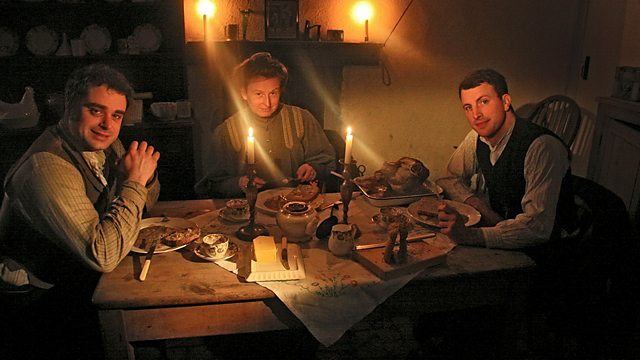 Two archaeologists and a historian try Edwardian life for a year. They prepare for the arrival of their first livestock, and historian Ruth Goodman cooks a sheep's head stew.

Archaeologists Alex Langlands and Peter Ginn and historian Ruth Goodman arrive at Morwellham Quay in Devon - once home to one of the busiest ports in Britain. For the next twelve months they will be attempting to bring it back to life as it was in its Edwardian heyday.

In September they begin with the basics. They set up home in one of the cottages, where the first task - after cleaning - is unblocking the chimney so they can get the range working in order to cook.

They prepare for the arrival of their first livestock - a flock of sheep and a ram called Cyril, and Ruth cheers up the cottage by making a rug out of rags. And she cooks her first meal on the range - a sheep's head stew. Alex builds a hay rick to store feed for the animals over winter; while Peter heads to Bodmin moor to carve a stone feeding trough.

And they must plant crops. The high acidity of the soil makes it infertile for growing crops, so the top priority is neutralising the acid with fertilizer - and for this they must make deadly quicklime. They will need literally tonnes of the stuff. It is a hazardous and gruelling - but essential - job.