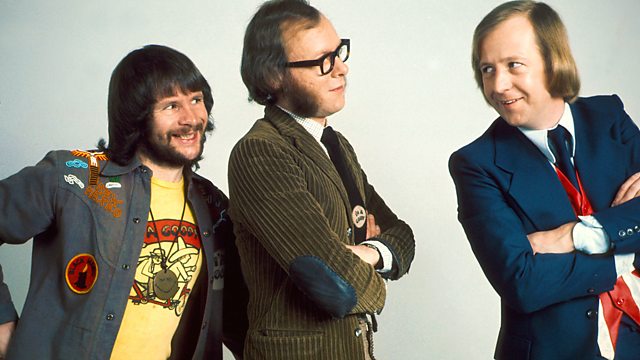 The Goodies: Anything, Anywhere, Anytime

In their twelve years in our living rooms the Goodies rediscovered the Lost Island of Munga, represented the UK in the Winter Olympics, started Britain's space program and blew up the BBC.

First appearing on our screens in November 1970, The Goodies' Bill Oddie, Graeme Garden and Tim Brooke-Taylor - were prime-time mainstays for the next decade. They were the fifth biggest-grossing pop act of 1975, bagged two Silver Roses of Montreux, and were so funny they caused a 50-year-old bricklayer to laugh himself to death.

Their shows, in which the trio played an agency of three bicycling blokes for hire to do "anything, anywhere, anytime", were freewheeling streams-of-nonsense in which TV conventions were upended and every silent-movie gag in history lovingly re-created.

On the 40th anniversary of the Goodies' television debut, comedian Ross Noble hops on his trandem and revisits a world of giant cats, Lancastrian martial artists, rampaging Dougals and funky gibbons.