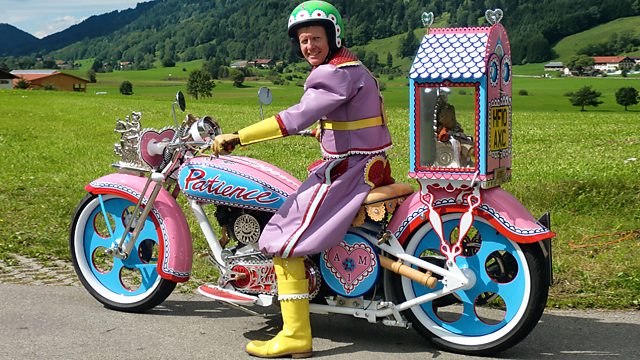 Grayson on His Bike

4 Extra Debut. Artist Grayson Perry takes a journey across Bavaria, with his favourite teddy bear, reflecting on art and pilgrimage. From November 2010.

Grayson spent a troubled childhood in suburban Essex creating a fantasy life where he fought off the brutish invading Germans, under the command of his teddy bear Alan Measles, a plucky wartime Resistance leader who became his hero, a sort of personal God and the embodiment of everything that was good about masculinity.

Now Grayson Perry has commissioned a highly decorative Kenilworth AM1 motorcycle, with a shrine on the back for his teddy bear, whose inaugural voyage, Ten Days of Alan, takes them across Bavaria, on a mission of reconciliation with their old enemies.

Starting out from their hometown of Chelmsford, Grayson and Alan Measles' journey takes in the 1920s Nurburgring racetrack and religious icons like the Isenheim Altar by Matthias Grunewald and the church in Wies, where a peasant saw tears in the eyes of a flagellated Christ figure in 1738. They visit Mad King Ludwig's fantastically Rococo Schloss Neuschwanstein where much of Chitty Chitty Bang Bang was filmed,the Steiff Teddy bear factory in Giengen and end up in Backnang, Chelmsford's twin town, to hand over a message of goodwill to the local Mayor.

As they go, Grayson and Alan reflect on the nature of art and pilgrimage, shared memories of childhood and the speed of their motorbike on Tyrolean mountain passes. Come sunshine ? Or rain.