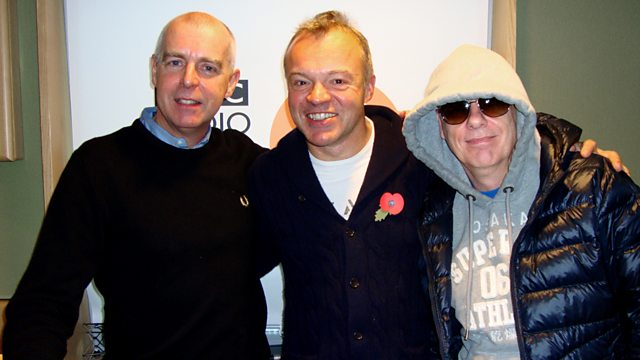 On Graham's latest show Girls Aloud star Nadine revealed why she'll still be a Coyle after marriage & Chris from pet shop boys reminisced about his forgotten duet with Ian Wright!

On Graham's latest show Girls Aloud star Nadine told us why she doesn't get her hands dirty at the restaurant she runs, while Chris from pet shop boys admitted he's happy being in Neil's shadow, before cheering us all up by asking for Eric Carmen's 'All By Myself'.

'(Escape) The Pina Colada Song' from Rupert Holmes was interpreted by Fiona Palmer in Chislehurst (wrongly according to many listeners) in this week's 'Tune with a Tale' and 'I Can't Believe It's Not Better' was 'Brother Louie' by Modern Talking as chosen by Thomas Scallan in Country Antrim.

With Andy Serkis and Samantha Bond

See all episodes from Graham Norton