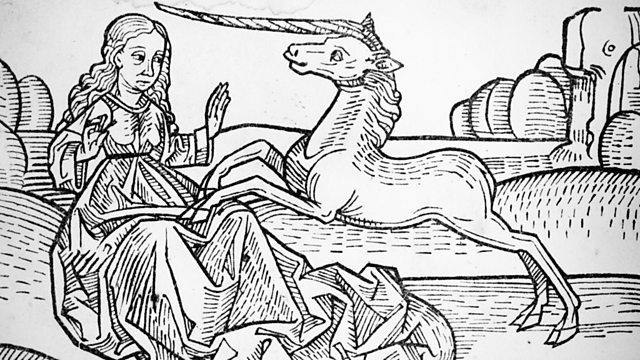 Melvyn Bragg and his guests discuss the history and mythology of the unicorn.

Melvyn Bragg and his guests discuss the unicorn. In the 5th century BC a Greek historian, Ctesias, described a strange one-horned beast which he believed to live in a remote area of India. Later classical scholars, including Aristotle and Pliny, added to his account of this animal which they called the monoceros, a vicious ass-like creature with a single horn in the middle of its forehead.For centuries the monoceros or unicorn was widely accepted to be a real - if rarely seen - beast. It appears in the Bible, and in the Middle Ages became a powerful Christian symbol. It continued to be represented in art and literature throughout the Renaissance, when 'unicorn horn' became one of the most valuable commodities on earth, thanks to its supposed properties as an antidote to poison. As late as the seventeenth century, scientists believed they had found conclusive proof of the existence of unicorns. It was some time before the animal was shown to be a myth; four hundred years on, the unicorn retains much of its fascination and symbolic power.With:Juliette WoodAssociate Lecturer in Folklore at Cardiff UniversityLauren KassellLecturer in the History and Philosophy of Science at the University of CambridgeDavid EkserdjianProfessor of the History of Art and Film at the University of Leicester.Producer: Thomas Morris.