BBC One
Tom Daley: The Diver and His Dad
Main content 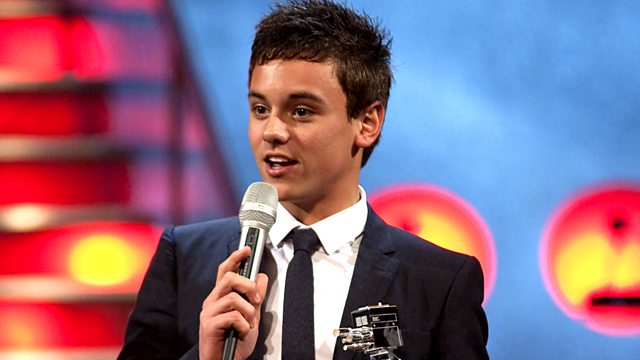 Tom Daley: The Diver and His Dad

Documentary following Tom Daley, the 16-year-old from Plymouth who is diving for gold in the Commonwealth Games, as he defends his titles and studies for his GCSEs.

Tom Daley is diving for gold in the Commonwealth Games. The extraordinarily gifted 16-year-old from Plymouth is the subject of this documentary.

An intimate portrait made by award winning film-maker Jane Treays, the film follows Tom during 2010, an exceptionally challenging year for the youngster, as he defends his World, European and British Championship titles and sits nine GCSEs at Plymouth College.

His number one fan, driver and bag carrier is his dad, Rob, infamous for crashing the 2009 World Championship press conference and tearfully requesting a cuddle from his son. Rob is a genial, dedicated sports parent, never missing a competition or training session. The film follows Tom and his dad as they banter their way through life, dealing with exam pressure, injury and planning ahead for London 2012, where Tom dreams of winning the gold medal in the men's 10m platform.

Rob too is facing a highly personal challenge. Four years ago he was operated on for a brain tumour the size of a grapefruit. The tumour is now growing back, and the film follows Rob as he undergoes scans and tests to determine treatment. "I wonder if I'll make 2012, or see grandchildren. I think, why me?"

As Tom's schedule becomes increasingly hectic - up to six hours diving a day as well as fitting in academic study - Rob tries to plan his year around international competitions and hospital appointments. The film follows Tom as he turns 16, from boy to man, and visits Sheffield, Budapest and Tuscon as he trains to master the world's most difficult dives. No longer a child prodigy, Tom has to compete against 26-year-olds with more strength and experience.