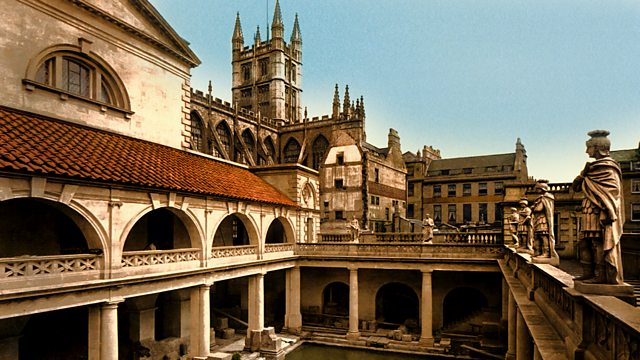 Sunday Feature The Romans in Britain
Episode 1 of 2

Historian Bettany Hughes explores our first contacts with the Romans and how people loved or resented their new overlords.

Historian Bettany Hughes looks at our first contacts with the Romans and how people loved or resented their new overlords. Our relationship with the Romans used to be a cosy one - once we saw them as our fellow imperialists who civilised 'us natives', and a jolly good thing too. Even now that some of that 'special relationship' has persisted. We love discoveries of forts and towns and baths, and we're lot less impressed by a nice British round house. Yet perhaps 97% of our ancestors would have been living in those roundhouses, many of them turning up their noses at Roman culture beyond the odd bit of bracelet or pottery.

Where we do pay attention to the native British, it's to the freedom fighters like Boudicca and Caractacus, but we rarely think about ordinary life under occupation or the culture shock of suddenly finding yourself living in a Roman town. Roman towns would have looked as alien to our ancestors as the dizzying streetscapes of Bladerunner with their tall rectangular stone buildings, cacophony of languages and intimidatingly foreign way of life.

Nor do we think about the most important woman in early Roman Britain, the dazzling ruler of most of Yorkshire - the pro-Roman Cartimandua, queen of the Brigantes who built one of our largest prehistoric sites at Stanwick and who caused an international incident when she ditched her husband for his armour bearer. Her canny but failed experiment in client state-building would set the future for the whole of the North of England. She was a much bigger player than Boudicca. It's up in the North that we see occupation in shockingly modern terms, as those enormous Roman armies set up permanent home, sucking the local areas almost dry and becoming the law of the land. Up here, occupation bites.

The Birth of the Britons—The Romans in Britain