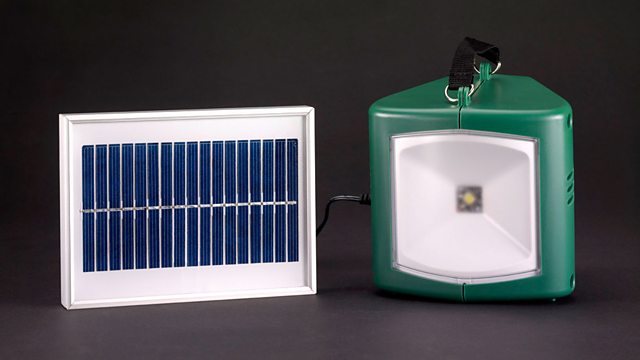 The final programme in Neil MacGregor's world history as told through things. For his last object he has selected a solar-powered lamp and charger that is already changing lives.

The very last episode in Neil MacGregor's history of humanity as told through the things that time has left behind. The director of the British Museum in London has spent the past year choosing objects from the museum's vast collection to represent a two million year story of humanity.
Throughout this week he has been with objects that that speak of the great shifts in human organisation and thinking in the modern world. Here he describes the object that he has picked as his last; it's a solar-powered lamp and charger that he believes can revolutionise the lives of poor people around the globe. The portable panel can provide up to 100 hours of light after just 8 hours of direct sunlight. It can also charge mobile phones and help bring power to millions of people around the world who have no access to an electrical grid. Simple, cheap and clean - this is revolutionary technology for the future. Nick Stern, the expert on the economics of climate change, describes the potential impact of new solar technology. Neil explains why he has chosen a solar-powered lamp and charger as his final object - with examples of how it is already being used in rural Bengal and urban Kenya.

This lamp is powered by the small solar panel connected to it. As well as providing light, power from this panel can be used to charge mobile phones. This object has been chosen to reflect our ingenuity, and the challenges we face, in the twenty-first century. The kit uses a range of new materials and technologies, including silicon-chip technology, which can also be found in computers and mobile phones. Here it is used in the solar photovoltaic cell, which converts sunlight into electricity. Exposing this cell to eight hours of bright sunshine provides up to 100 hours of lamp light.

How is this technology changing lives?

There are currently 1.6 billion people across the world without access to an electrical grid. In these areas, objects such as this allow people to study, work and socialise outside daylight hours, vastly improving the quality of many lives. Additionally, households using solar energy rather than kerosene lamps are able to avoid the risk of fire and the damage to health that kerosene can cause. Once purchased, this kit costs very little to run, making it a very efficient option for many people living in the world's poorest countries.

Comments are closed for this object