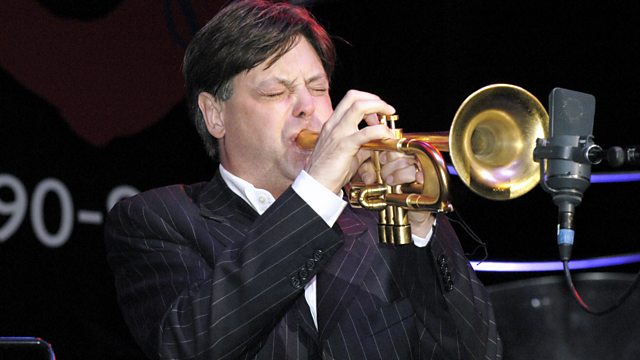 Guy Barker charts the pivotal moments that have changed the direction of jazz. He looks at hot jazz and the Swing era, ushered in by Benny Goodman in 1935.

Guy Barker continues to explore the history of jazz, focusing on the turning points and pivotal events that have shaped the genre, and discovering some great stories and larger-than-life characters along the way.

Part three, Swing! Swing! Swing! looks at Benny Goodman, the 'King of Swing'. In early 1935, Benny Goodman and his Orchestra were starting to attract attention with weekly appearances on the Let's Dance radio show, broadcast from New York. For most of the show, the band mainly played the unexciting sweet arrangements popular at the time, which failed to excite the East Coast audience. Although they weren't aware of it, the band had developed a following on the West Coast where listeners, three hours behind, were regularly treated to an extra hour of music, featuring hot jazz arrangements by the likes of Fletcher Henderson.

In July 1935, the band set out on a coast-to-coast tour, often receiving an indifferent reception. By August, Goodman found himself on the West coast and was ready to throw in the towel. Then, on 21 August 1935, everything changed. Amidst a lukewarm reception at the Palomar Ballroom in Los Angeles, in a do-or-die move, Benny Goodman decided to bring out some of Fletcher Henderson's hot arrangements into the otherwise fairly standard and unexciting set. Unbeknownst to him, this was the music the West Coast audience had been waiting for, the music they'd heard in the final hour of the Let's Dance shows. They went crazy and within days Goodman had become a national star. The Swing era had begun!