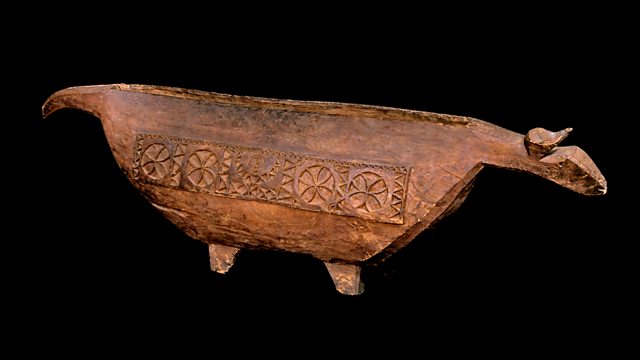 Neil MacGregor is looking at global power and economy in the 19th Century. Today he is with a drum from Sudan that Kitchener acquired for Queen Victoria.

The history of humanity as told through one hundred objects from the British Museum in London. This week Neil MacGregor, the Director of the Museum, is looking at Europe's engagement with the rest of the world during the 18th Century.

Today he is with an object "freighted with layers of history, legend, global politics and race relations". It is an aboriginal shield from Australia, originally owned by one of the men to first set eyes on Europeans as they descended on Botany Bay nearly 250 years ago. This remarkably well-preserved object was brought to England by the explorer Captain Cook. What can this object tell us about the early encounter between two such different cultures? Phil Gordon, the aboriginal Heritage Officer at the Australian Museum in Sydney, and the historian Maria Nugent help tell the story.

This buffalo-shaped drum probably came to Khartoum through the internal African slave trade from non-Muslim southern Sudan. There it would have been played as part of a court orchestra and used to transmit messages or summon warriors to war. It was captured by the British and Egyptian army in a battle against Mahdist forces at Omdurman near Khartoum in 1898, after which a crown designating it as the property of Queen Victoria was stamped into the animal's tail.

Who was the Mahdi?

In 1881 a Sudanese sheik called Muhammad Ahmad declared that he was the Mahdi - the prophesied redeemer of Islam who would found a new Islamic World Order. After a lengthy military campaign he and his followers took control of Sudan from the previous Turkish-Egyptian government. The Mahdi united many of Sudan's diverse ethnic groups, while conquering and enslaving others. Many non-Muslim slaves from southern lands were nominally converted to Islam and served in the Mahdist army. Some of their artefacts, like this slit drum, were assimilated into Mahdist ideology and inscribed with Islamic decoration.

An object with many owners

This large wooden slit-gong in the form of a short-horned buffalo or ‘bush cow’ is typical of instruments which form part of court orchestras among the kingdoms of central Africa such as the Azande, Mangbetu and many others whose territories occupy regions now defined by modern political boundaries: southwest Sudan, northeast Democratic Republic of Congo and eastern Central African Republic.

Slit-gong’s are principally used to transmit messages, sometimes across great distances, proclaiming important events and, traditionally, for summoning warriors to war. This one was taken during the defeat of the Sudanese Mahdist forces by the British under Lord Kitchener at the Battle of Omdurman in 1898. It is an interesting puzzle as to why it should have been found in the heart of nineteenth century Islamic fundamentalism almost a thousand miles to the northeast of the lands of the non-Islamic people whose craftsmen had originally created it - and why had the intriguing incised and relief designs on each of its flanks been added by its new owners?

In 1881 Muhammad Ahmad had declared himself Mahdi (‘rightly guided one’) in Kordofan province Sudan, and led a jihad or Holy War against the Turks, the Egyptians and their British allies who were forced out of Sudan. The Mahdi died shortly after the fall of Khartoum, but the material culture of the Mahdiyya, under the Mahdi’s successor, the Khalifa, became characterised by three factors: appropriation, assimilation and unification. The Mahdists had to declare their new world order visually, but they also had to unite the hugely diverse peoples who loosely followed the Mahdist cause.

A ferocious and virtually unchecked slave trade had been operating out of Sudan since the 1820s, decimating the lands to the south and bringing huge numbers of enslaved peoples through Khartoum and onwards to Egypt, Turkey and the Middle East – and ultimately providing a perfect excuse for the British, and Kitchener, to launch an invasion. Many of these slaves were enlisted into the Mahdist armies. Important elements of their material culture, including throwing knives and slit gongs, were adapted to the Mahdist cause.

What makes this slit-gong particularly fascinating are the different ways in which it has been assimilated. Both of its flanks have been embellished with Islamic designs and motifs, some of which, such as knives and triangles, are calculated to pierce the Evil Eye and thus protect the owner from harm. On one side the designs are incised, though interestingly they are carved in relief on the other, a process requiring the removal of a good deal of wood, thus radically altering the sound of the gong as well as its visual appearance – a particularly significant form of assimilation for a musical instrument.

This process of assimilation has been carried out by the instrument’s more recent owners: first, a crown denoting property of HM Queen Victoria was stamped into the animal’s tail. Finally the British Museum has added its registration number. Its journey may not be over.